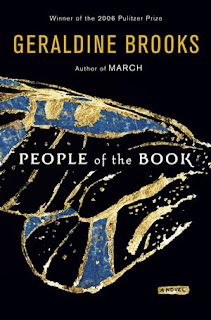 I love presents. I especially love them when they are beautifully wrapped. To me, the way a gift is presented is as much an indication of its giver’s intent as what is inside. Geraldine Brooks’ People of the Book is like a beautifully wrapped gift.

Hanna Heath, a rare-book expert, is commissioned to investigate the history and origins of a Jewish Haggadah – a prayer book used during Passover to tell the story of the Hebrew’s journey out of slavery in Egypt. This particular manuscript is unusual in that it also contains artistic portrayals of the story and the tradition. Dr. Heath recovers a number of artifacts in her examination – a portion of an insect wing, salt remnants, a wine stain and a white hair.

The narrative of the story is then built on alternating episodes of the present day and parts of the book’s history that account for the artifact it retained. By doing so, Brooks tells a number of small tales, each poignant and distinct with memorable characters and events that parallel the plight and survival of the Jewish race, from the inquisition to Nazi Germany. The looks in time are given backward so that the final historical narrative is that of the young artist from the 15th century who painted the illustrations.

My one exception to the novel is that the slight plot turn at the end of the book was unnecessary. I understand that many of my peers need plot device in order to feel fulfilled in a reading. This is not the case for me. So, while the twist (and I use that term loosely) is fine – it doesn’t detract –  for me it just wasn’t needed.

The assembly of Brooks’ novel creates a primary character, that while inanimate is very much alive, that eloquently shares with the reader its vivid and varied saga – a lovely adornment to the story inside.

9 Replies to “Book Review :: People of the Book”