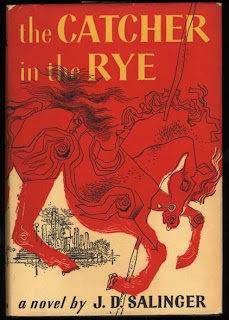 My book club chose The Catcher in the Rye as our August selection. We were feeling the need for a male author, and with the demise of Salinger earlier in the year, it seemed fitting. It was a re-read for most of us, and I’m not very good at that – I’ve talked about that here before – but I do think that some books warrant re-reading when you’re in a different time and place.

Not this one. I think that The Catcher in the Rye should come with a warning: “If you’ve ever written a mortgage check, do not read.”

It is the story of a weekend in the life of Holden Caulfield – a 17-year old just days away from dismissal from prep school. He decides he’ll preempt the formality by leaving on his own, and so he takes the money his grandmother has sent him and checks into a hotel in NYC, careful to avoid his home neighborhood. What fills this plot is Holden’s cynical, vulgar and at times unreliable stream-of-consciousness on authority, sex, social nonacceptance and rebellion.

I first read this book in either high school or college, and I remember loving it. Holden seemed like an intelligent but misunderstood young man on the brink of a great revelation. Twenty years later, he comes across as a spoiled and unappreciative brat. Pencey is the fourth prep school Holden has been kicked out of. This time he’s flunking out – the only course he passed is literature and he says that’s because most of what he’s doing is a repeat from a previous school. There is never a question that the reason Holden is flunking out is lack of motivation. He simply doesn’t care.

The only thing that Holden does seem to care about is Phoebe, his younger sister. Toward the end of the novel he sneaks into his parents condo to talk with her. It is here that the title phrase is revealed: Holden has a vision of children playing in a rye field on the edge of a cliff, and he is standing on the outer rim to catch and save anyone who might come too close to falling off. (It is also a misquoted allusion to a Robert Burns poem.) I see an irony in this vision Holden has of himself when he is also teetering on the brink of his future.

There is no doubt that Catcher in the Rye has a place in the cannon – Salinger has expertly captured the universal themes of rebellion teenagers feel. He created a classic cultural icon for questioning authority and particularly “the establishment.” So should you read it? Absolutely. Just know that depending on how responsibly you are for paying your own bills, you might not like it.

But what about you? Have you re-read The Catcher in the Rye since your youth and had a similar experience, or do you still love Holden’s rebellious tendencies? Is there another book you’ve re-read and were surprised by having a different experience than your first?

4 Replies to “Book Review :: The Catcher in the Rye”