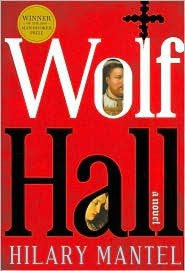 Winner of the Man Booker Prize in 2009, Wolf Hall is Hilary Mantel’s account of part of King Henry VIII’s reign in England through the eyes of Thomas Cromwell – a man often stereotyped as being no more than a political ladder-climber. The years covered are book-ended by the banishment and subsequent death of Cardinal Thomas Wolsey and the execution of Thomas More, which appropriately draws the reader’s attention to the context of religion during this portion of Henry’s term.

I am not as well versed on this portion of England’s history – famous as it is – and experiencing this as a book on tape, I kept finding myself having to stop and consciously remember who all the players were. I would have benefited from having a cheat sheet available of the title, position and relationships of all the characters.

Other than that, I really enjoyed Wolf Hall. This was an incredible time in church history as well as the monarchy, and I thought Mantel did a great job in her portrayal of discussions of topics that had such weighty consequences. I’m currently reading Founding Brothers, and at the end of the first chapter the author makes the point that there are times in our history when lapses of character can be overlooked or absorbed into history, but there are other times when the stakes are so high and there is so much on the line that nothing is more important than integrity and character. (This is paraphrased of course.) To me, Wolf Hall describes just such a time for England and the church.

Along those lines, one of my observations that became abundantly clear – and perhaps this was Mantel’s point in humanizing Cromwell – men in the court of Henry VIII, or perhaps during this period, didn’t and couldn’t survive by being purely self-serving. They had to be, at a minimum, relationally savvy and more likely, widely respected for their wise counsel. Cromwell was both of these things.

Tudor history has been enjoying a bit of a spotlight in pop culture for several years now, and this well-researched account should appeal to readers who thrive on the topic. However, it is the expertly crafted characterization that makes Wolf Hall an excellent read for a broader literary audience.