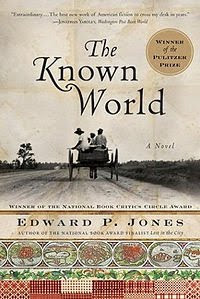 Pulitzer Prize winning novel, The Known World, by Edward P. Jones, lived up to all the hype. And, I regret to say this was a book on tape for me, because I think I would have loved lapping the words from the pages.
The Known World is an epic tale centered around two men: Moses, the black foreman of a plantation in a fictional Manchester County, Virginia; and his black slave owner, Henry Townsend. The book explores a little known and even less talked about practice of free blacks who owned slaves during pre-Civil War America.
In addition to these two men, there are a number of other characters whose stories resonate and pull the reader in. Caldonia – Henry’s wife whose affair with Moses after Henry dies leads Moses down an ill-fated path; Will Robbins, Henry’s former owner and mentor; sheriff deputy John Skiffington, who with his wife grapples over what to do with a young maid they are given as a wedding gift; Alice, the slave lacking all her sense after a being kicked in the head by a mule as a child; as well as a host of others.
Like many epic novels, The Known World portrays a community and its characters and the intricate weave of circumstances that tie them all together. Unlike other tales, what is at stake is the core question of human dignity as we relate to one another. Few characters escape unscathed in Jones’ hard look at the responsibility we all share in respecting our fellow man. Perhaps the “peculiar institution” of slavery is the backdrop, but Jones doesn’t stop there. Relationships between neighbors, spouses, friends, relatives, lovers and colleagues are equally called to task.
While Jones may have a parade of characters who fail to do right toward their toward each other, they provide an introspective opportunity for the reader. If this is starting to sound too heavy, the charge is made amid colorful and often humorous tales.The Known World may just be the best of all worlds – entertaining, educational and insightful.