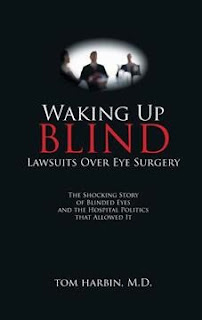 Patients should trust their doctors, right? When a doctor says you need a specific treatment to save something as important as your vision, you should trust them, right?


Waking up Blind is another book in which my worlds collide. Dr. Tom Harbin’s novel is the non-fiction account of a wrong-eye surgery at a local university, and the physician’s peers and leaders who tried to cover up the error.

The events happened more than 25 years ago, way before my time in our medical community, so that the author is really the only person I can say I know. (In a previous career, I did sell the then newly ex-wife of one of the minor players a really nice renovation on her town home; so I knew of him, but by name only.)

The physician at the center of the case was not only guilty of a single wrong-eye surgery that left his patient blind in the healthy eye and with poor vision in the impaired one. This incident brought to light much larger issues including a pattern of conducting unnecessary surgeries, unethical patterns of scheduling low socio-economic patients and billing fraud. And, at the time this physician was chair of the department and had almost singlehandedly raised millions of dollars to open what would be a world-renown eye clinic.

What followed was a series of events where his physician peers covered for him and those who dared to speak against him were punished. As clinic and university officials became aware, they were also guilty in their complicity.

This book was particularly fascinating to me because I work in the world of physicians and for an institution that places great importance on quality and transparency in clinical practice. (We are the only hospital in my state to publish our quality scores on our website.) And I do believe that in the years since this happened, transparency has been the trend in healthcare. I believe in the heart of physicians and the trust that is necessary in the doctor / patient relationship. That said, I know that these types of things still happen and that they are still covered up. Harbin’s account (perhaps unintentionally) makes a strong case for second opinions.

What I didn’t like about the way the book was written is that the author interjects himself too often in the story. As with other true-crime stories, the narrative should flow as any novel, but in this case the author often stops to editorialize. For example, anytime an amount of money is given, the author translates the amount considering inflation for 2008. “Dr. X was given a $500,000 bonus. ($1.2 million in 2008)” (Not a direct quote, just for example.) And, there a few time when he refers to himself – the author has never found this to be true…the author did thus in such, etc. This was annoying. These notes were probably included so that readers without doubt understood the guilt implied in the evidence. However, for me, it made the story seem more subjective, made me question the author’s motives and in the end, created a weaker argument.

Regardless, I think Harbin was successful in his mission:

I wanted to document in full detail what happens when leadership fails to respond to people bringing credible warnings about existing problems. The events described here could happen at any university or in any company, public or private. The current headlines bear witness to the many consequences of other leaders ignoring warnings of problems similar to those in this book.

An excellent read for anyone in the medial field or with a passion for transparency in business.

Since this review is as close as it gets to blurring the line between my personal and professional life, let me reiterate the disclosure on my “About Me” page; views expressed on Babbette’s Book Blog are my own and do not reflect the views of my employer. Also, Harbin’s book won an award within my institution, and I sit on the committee that selects the winners of these awards. The copy that I reviewed was checked out from my employer’s library.