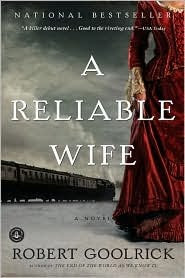 I’ve got to be honest. Robert Goolrick’s A Reliable Wife was a book I thought I would love that I just didn’t. Everything I’d read about it said I’d like it. A couple of other readers had said, “I didn’t love it, but I think you will.” Not uncommon for a particularly dark tale.

Here’s the nutshell. Ralph Truitt, wealthy business tycoon, places an ad for a wife; Catherine Long answers it. When she arrives in his cold, bleak, no-where Wisconsin town it is obvious that she isn’t who she claims to be. She has come with a plan for killing him so that she and her (her words) lazy, worthless, scoundrel lover can live a life of luxury.

Ralph Truitt isn’t who he seems to be either. He ended up in this godforsaken town to take over his father’s business when his father died. He had been in Europe living frivolously with prostitutes and drugs. He had just fallen head-over-hills for an Italian Countess, and so he pays the dowery quickly and brings her back with him. She grows bored, takes a lover, leaves Ralph, is left by her lover, and dies alone, her body ravished by syphilis.

Ralph’s true motive for a wife is so that she can find the son he abandoned (not his birth son, but a son his wife leaves behind, a result of the affair) and help make amends. Despite no blood relation, it appears the acorn doesn’t fall far from the tree, and the son is living the same life Ralph had before Ralph returned to the US to take over for his father.

And so perhaps my quandary is evident – for the first 200 pages, there were no redeemable characters. Somewhere after the first two/thirds, the reader does come to understand Catherine’s life. And by the end, Ralph does emerge as a sympathetic character. Perhaps the “moral” if there is one is that no person is ever truly worthless? Any life can be redeemed. But for me, it was too little, too late to make up for the book as whole.

This is a book I would have liked better had I not had such high expectations.