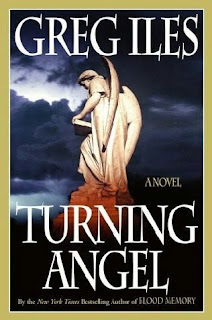 I’ve said it before, but this is what I like best in an audio book. Greg Iles’ Turning Angel is the epitome of a page turner, with interesting characters and riveting narrative. In addition, he offers some pretty un-PC editorial of life in the South that is apparent and true, but would not win him a popularity contest.

While this is my first experience with Iles, I figured out that Penn Cage must be a reoccurring character for him. In this novel, Penn, a former prosecutor turned best-selling author, is thrown in the middle of Natchez, Mississippi’s political, race and drug wars when his best friend from childhood and current beloved Natchez doctor (Drew Elliott) is arrested for the murder of the local high school senior starlet. Kate Townsend was raped, and her murdered body was naked.

When Drew comes to Penn to ask for legal representation, Penn is shocked to learn that his friend has been sexually involved with the girl for almost a year, and that he has made plans to leave his wife, follow Kate to Harvard and set up a practice there. He’s already passed his boards in Massachusetts.

Wanting to believe, but not convinced, that his friend is innocent, Penn sets out to unravel Kate’s complicated personal life and learns more than he ever imagined about the sex lives of high school students, the popularity of raves – even among the “good kids”- and just how intwined foreign drug trade is in what seems to be everyday life in a small town. Along the way, Penn must come to terms with his own feelings toward his 11-year-old daughter’s babysitter, a classmate of Kate’s, as well as the state of race relations in a town where slavery was a reality and the chasm between the have’s and have-not’s is as wide as ever. (Penn’s girlfriend offers a surprisingly honest and undisputed hypothesis of the root of the current rift over a dinner conversation.)

Turning Angel was a great find for me, and I will definitely be looking for more books featuring the character Penn Cage.