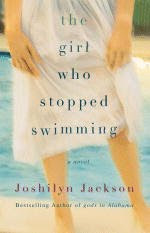 Flannery O’Connor once said (paraphrased): “When you’re from the South, it isn’t a matter of if there are freaks in your family, it is just a matter of which side they are on.”

The Girl Who Stopped Swimming is about Laurel. Laurel’s family has its share of freaks, and this is the story of how she learns to accept them.

I’ve been waiting for this one for a long time. Since listening to Joshilyn Jackson read Between, Georgia and loving it so much, I was highly anticipating her next novel. Again, Jackson, with her background in theater, does a great job reading her own work.

The Girl Who Stopped Swimming is told in third person, and mostly from the point of Laurel, who sees ghosts. She’s never told her husband, David, about it, so she’s not sure what to do when the young friend of her only daughter comes to her one night. The death of Shelby’s friend sets off a chain of events that force Laurel to explore her own family history that includes its own secrets and ghosts.

Primary players in her history are her sister – Thelia – who owns a community theater with her gay husband, and her mother, famous for her “cowslipping” ability – an allusion to Watership Down, and defined as the ability to proceed with what is proper even when the ugly is all around.

If you’ve been a fan of Jackson’s two previous books, beware – this one is different. This one is dark. (Which you know for me isn’t a bad thing.) I was expecting the parts that made me laugh out loud, and this one doesn’t do that.

On the audio version that I listened to, Jackson grants an interview in which she calls this piece Southern Gothic. While listening to it, I hadn’t thought of it that way, but that’s a pretty good description – maybe New Southern Gothic. This is what made me think of the O’Connor quote, and I think it fits well.

While I missed the humor, Jackson’s art of exploring characters and relationships, and telling the truth about them, is as strong as ever.

2 Replies to “Audio Book :: The Girl Who Stopped Swimming”