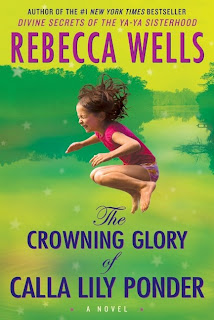 Have you ever gotten the feeling when reading a book, that what is in your hands is an earlier written manuscript that the author has revived now that they are famous? That’s my take on Rebecca Wells’ newest novel The Crowning Glory of Calla Lily Ponder.

Wells’ is best known for her humorous depiction of the life-long friendships of the Ya-Ya Sisterhood. I’ve read all three of these and loved two of them. However, I just didn’t feel like the quality of writing in Crowning Glory matched that of her earlier published works.

First though, Crowing Glory is not humor, which makes it different right from the start. It is an episodic novel (I’ll explain in a minute) that follows the growth of Calla Lily Ponder in La Luna, Louisiana, a small town that sits on a snaking river. I call the novel episodic because it isn’t quite a series of short stories, but then it doesn’t follow a smooth narrative either.

Love, friendship, race, family – Crowning Glory has the basic themes that show up in any novel set in the South. One of the more interesting episodes that Wells does nothing with deals with race when Calla Lily witnesses the racist Sheriff (yes, bet you’ve never seen one of those in fiction) injure one of her black school mates. The theme she dwells too much on is the personification of the moon into a mythical figure that watches over Calla Lily and protects her. Way over done and annoying by the time all is said and done.

Calla Lily’s mother is a hairdresser, and after her death, Calla Lily decides to follow in her footsteps, attending beauty school in New Orleans. She has her heart broken by her childhood sweetheart, but eventually returns home to restore her mother’s dream salon. There is one twist toward the end that I wasn’t expecting and thought was a clever turn, but not near enough to save the book as a whole for me.

So why do I think this may be an early work for Wells? She repeats herself – there are facts that she gives twice in almost the same wording. At other times, she throws in details that should have been provided earlier but seem to have been forgotten. For me, these seem to be the errors of a less experienced story teller – not the type Wells has proven herself to be in a couple of the Ya-Ya books. And, I don’t believe this is explained by it being a different style that is more serious.

And over-all, Calla Lily was just not a compelling character. When her mother dies, there are about three paragraphs on her diagnosis, illness and death and the rest of the chapter is about her funeral. Am I supposed to believe that a teenage girl whose mother suffers a long illness at home wouldn’t share more about it? I don’t remember a mother’s death in a book that I’ve read with less sympathy.

In defense of Wells, I read this as a selection for my book club and our opinions were pretty split. There were a couple of others who felt as I did and two of them didn’t even finish it. Others thought it was a decent light read. Regardless of our opinions, we all enjoyed the King Cake provided by Book Club Girl. Fresh from New Orleans Haydel’s Bakery. Yum!