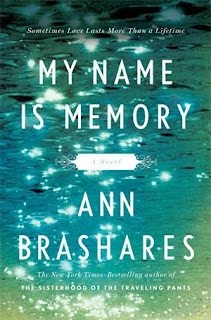 I haven’t read The Sisterhood of the Traveling Pants (nor did I see the movie) which is what Ann Brashares is best known for, but I really hope that her popularity carries over to her newest release, My Name is Memory.

Memory has been compared to The Time Traveler’s Wife, and while I understand the comparison, whether you loved or hated Audrey Niffenegger’s best-seller, don’t let that influence your reading of this one. And for the record, I don’t think Memory is as weighty as Time Traveler. It has also been compared to Twilight and Benjamin Button.

My Name is Memory tells the story of Daniel and Sophia (or Lucy, depending on which time period you are referring to.) Both are people who are reincarnated, living multiple lives in multiple bodies from one generation to the next. They are in love, and their quest is to find one another in the same lifetime so that they can be together. Daniel can remember his past lives, where Sophia cannot.

Let me stop here and talk about the genre of the book. I confess that I have a hard time with suspending disbelief, but I wanted to make the effort with this story, and when I did, I was so enrapt that all I wanted to do was learn more from Daniel about the thrill of living multiple lives. It is a fascinating concept.

The narrative alternates between Daniel, who begins his story in 541 with the first life he can remember and progresses to current day, and Lucy, the current day Sophia who begins putting strange pieces together to understand the mysterious boy from high school that she is strangely attracted to. In addition, there is Joaquim, who in one lifetime is Daniel’s evil brother and Sophia’s abusive husband and is trying to use Daniel and Sophia’s connection to enact a thousand year-old grudge on his brother. Joaquim bends the “rules” of reincarnation to suit his own will.

It has been a while since I’ve been so engaged in a narrative that I really rushed to find out what happens next. While I loved Lucy’s story, I got impatient for her to figure things out and then…oops. No. That would be a spoiler. Can’t tell. I will say that while the ending is somewhat predictable, there are enough slight turns to keep it interesting. And if you’re like me, you won’t be fully satisfied, which I think is OK because there are supposed to be two more to come. (Books, that is. Not lives, though maybe lives, too.)

My Name is Memory scheduled to be released on June 1, 2010 and is the first of a three-book series. It has been picked up by New Regency for screen rights. I was graciously provided an advanced copy for review by Lydia at G.P. Putnam’s Sons / Riverhead publishing.

5 Replies to “Book Review :: My Name is Memory”