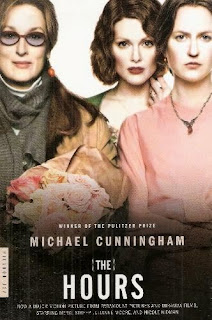 Michael Cunningham’s The Hours is another novel that I feel I’m the last one coming to. I haven’t even seen the movie, though after listening to it on audio, I don’t think I can bring myself to watch it. Not because I didn’t love it – I truly enjoyed listening to Michael read. (On a side note, I may have to change my stance on author/readers.) But because so much of the richness is in the characters head, and I can imagine that being played out well on screen. And perhaps this is one that I wish I had physically read instead of listening to.

Cunningham’s novel is three stories told in parallel of one day in the life of three different women: a 1920’s Virginia Woolf, who is in the midst of writing Mrs. Dalloway; Laura Brown in 1949, a young, pregnant housewife with a young son who is reading Mrs. Dalloway; and the modern character, Clarissa Vaughn, whose writer friend, Richard, calls her Mrs. Dalloway because of her first name. The only exception to this narrative is at the beginning when the character Virginia Woolf’s describes her suicide, establishing the pervasive themes of mental illness and suicide.

Thematic parallels are actually very rich in The Hours – which is one reason why I loved it so and will perhaps find time (some day) to read it. There is the idea of creation in all three stories: Woolf is creating her novel, Brown is creating a birthday cake for her husband, and Vaughn/Dalloway is creating a party for Richard. Love – both forbidden and discarded – is common as well. And I’d be remiss to not mention homosexuality – both in practice and experimentally.

The most interesting theme, and one I’d like to go back to look at, is the use of the color yellow. It seems to indicate both sickness and return to health. Roses, walls, rooms, people – are all noted as yellow. This is indeed one of the drawbacks of listening to a book. Had I been reading it, I would have began to underline or make notes so that could go back to better connect the dots.

And then of course there is the title. All of the main characters at some point feel the weight of the hours – both in its constraint and, ironically, in its vastness and need of filling. I wish I could give the quote from Richard toward the end when he is describing how overwhelmed he is by the hours that are yet to come that must be dealt with.

Changing directions a bit, Cunningham reminded me in many ways of Ian McEwan – or at least the experience of listening to The Hours reminded me of my experience with On Chesil Beach.Cunningham’s ability to express the range of emotion one feels at practically the same time is a gift. I thought Laura’s story was especially rich. She’s torn between a real love for her son and husband (though maybe her love for her husband could be argued) and the feeling of, “Is this all there is?” She wants to do the right thing and be fulfilled and isn’t sure that both can be achieved at the same time.

For such a brief book, I feel I could go on and on talking about The Hours. And this, for me, is what makes a great novel.