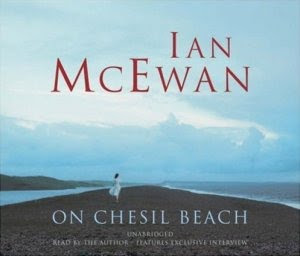 I have a confession to make. I tried not once, but twice, to read Atonement and just couldn’t do it. I feel like I have sinned against and let the whole society of readers down. As penance, I did not see the movie. That is my confession.

To allow Ian McEwan the opportunity to redeem himself, I picked up On Chesil Beach as an audio book (read by McEwan – which is something else I try to stay away from) at my work library. As I was checking it out, a sweet friend and frequent commentator on BBB made a face.

“What, you didn’t like it?” I asked tentatively, fearing her answer.

“I didn’t. I just couldn’t get into it,” she confirmed. “However, another of our frequent clients LOVED it, so maybe you will, too.”

I left with little hope, but I started it that afternoon.

On Chesil Beach is a short novella that tells the story of Edward and Florence on their honeymoon night in 1962. They are both virgins.The narrative alternates between the two characters and is primarily inner dialogue. Most of the way through the first of the four CDs I thought my friend was right – I just wasn’t getting it. I mean, what is the book about?

And then it clicked. I’m pretty sure I was in Florence’s head at the moment. She was describing with pinpoint precision her confusion and feelings of trepidation about the intimacy expected of her that night. And so I got it.

On Chesil Beach is an incredibly accurate revelation of the mix and dichotomy of emotions two innocent young people endure when culture dictates that certain topics are off-limits for discussion. Lack of communication leads to wrong assumptions which lead to further misunderstandings of the paramount order. As a reader (or listener) you witness the pendulum of every emotion in its purest sense and see how closely love and hate coexist.

Over and over I was amazed at how well McEwan could describe the female point of view in an intimate relationship. Particularly during the argument, I identified so well with Florence’s feelings, while at the same time empathizing with Edward over what she felt that she wasn’t saying. What both were feeling is heartrendingly real.

Some of Florence and Edward’s story is told in flashback, and there is a bit at the end of their future, but much of that is left in question – intentionally focusing the reader on this specific night, what should have been a highlight in their life.

The end of the audio version includes an interview with the author in which McEwan reveals his intent with the short novel to be read in one sitting. While I imagine that this would be the best way to enjoy his story, regardless, it is worth the small amount of time it takes to experience it. I know that this experience has encouraged me to either (1) try Atonement again or (2) try another McEwan novel.

The New Yorker published an excerpt and you can find it here. Also, a friend in the blogging world is hosting a giveaway of a signed copy of Ian McEwan’s Solar. Go check that out as well.

6 Replies to “Book on Tape Review :: On Chesil Beach”