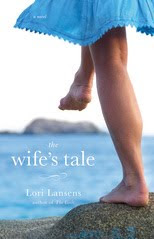 Once again, Lori Lansens proves her ability to combine depth, humor and dark in her latest novel The Wife’s Tale. The narrator is Mary Gooch, who chronicles her life in numbers; that is, how many pounds she gained when particular milestones passed – two miscarriages, a hysterectomy, the death of her cat, the death of her father. Self-deprecating in her admission of obsession over food, Mary is forced to take inventory of her 43 years when her husband fails to come home on the eve of their 25th wedding anniversary.

She begins at age nine, the first time someone refers to her as obese. And while Mary actually thinks the doctor said obeast, she is not confused by the connotation. From there she tells of adolescence and the one summer she actually lost weight. How this happened is too funny for me to spoil here. But this is also the year she meets and falls in love with Jimmy, who wants to marry her against his family’s wishes when she learns she pregnant.

As Mary is sorting out why Gooch left, she assesses their years together. Gooch (as she calls her husband) really seems to have loved her. While he did fall in love with a thin Mary, in all their years together through her continual weight gain and self-loathing, he demonstrates true acceptance, passion and empathy for her. Perhaps this is why when he does leave, Mary clings desperately to the hope that he’ll return.

However, unlike crises of her past, this one forces her to act instead of react. For the first time in her life, she leaves their small Canadian hometown for the U.S. west coast – Los Angeles – where her mother-in-law lives with her dying, second husband. Along the way, she experiences – and is surprised by – true kindness from strangers. She also is surprised by how much she is capable of doing and figuring out on her own – an independence she has never taken the opportunity to flex.

She is also unable to eat. Her obsession for food is replaced by an obsession to find her husband, and so she begins to lose weight. However, Lansens refrains from giving final indictment about what this weight loss means. Mary is still overweight, and while she knows she’s getting smaller, others continue to accept her as obese. While at the beginning of her crisis she is unable to eat, by the end, she is accepting eating healthier foods and in moderation.

I have several unfinished thoughts about this book. The two main story lines – her weight and their marriage – are not completely resolved for me. And, Lansens includes what seems to me as a three paragraph pitch of another novel – The Girls – which I happened to have loved. (Both novels take place in the same small town.)

That said, what resonates is true and honest introspection from a less than perfect narrator dealing with things that happen in real life. And perhaps Lansens’ lack of resolution is what is most realistic in The Wife’s Tale.

*******
This book was graciously provided to me by Hachette Book Group as an advanced reading copy and is due to be published in the U.S. in February 2010.

One Reply to “Book Review :: The Wife’s Tale”