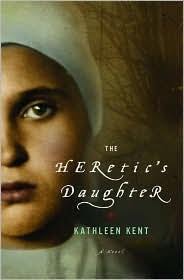 Kathleen Kent’s debut novel is part historical fiction and part family memoir. The Heretic’s Daughter is based on one of Kent’s own ancestor’s – Sarah Carrier – whose mother, Martha, was of the many innocents executed during the Salem witch trials. One of the reasons I loved this novel was for much of the same reason I liked Sarah’s Key and Guernesy – I learned more about the historical time of which it was written.

In The Heretic’s Daughter, Kent gives us her extensive research on the dates and events as well as the imaginative depiction of ten-year-old Sarah, who is caught in a family first accused, and then turned accusers (as was common during this time).

Martha is always thought odd by her neighbors, and so no one is surprised when her brother-in-law names her as a witch. The impending arrest allows Martha and Sarah a final opportunity to make the best of a strained mother/daughter relationship, and in this moment, Martha entrusts to Sarah the family history. Eventually Sarah and her three brothers are also arrested and so these five family members join dozens more held in small cells with the jailers cellar, and live for months in horrid conditions with little food.

Descriptions of how the trials were conducted, the methods of torture used to coerce confessions, the inhumane conditions of the cells, and the execution and burial of the condemned all expose harsh light on this dark period of American history, that up until now my knowledge had been limited to what I gained from The Scarlett Letter.

The historical backdrop aside, I think Kent’s depiction of family relationships – mother/daughter, father/daughter and sibling rivalry -are themselves worthy of discussion. Sarah’s relationships with both of her parents, while they seem distant and sometimes cruel, serve her well as she is forced to grow up quickly in very unchildlike circumstances. An item of note, Sarah uses her neighbors’ suspicions of her mother – since she is her mother’s daughter – to her advantage when needed.

An interesting subplot within The Heretic’s Daughter is the story of Sarah’s father and the mysterious family history that Martha hands to Sarah, making her promise she’ll not read it until she’s older. While the neighbors are wary of Sarah’s mother, they seem to respectfully fear her father. Though he’s tall and formidable, it seems to have more to do with his life in England before America and the tattered red army coat the garden scarecrow wears. In the end it is revealed that he was the executioner of King Charles the First – a death directly related to Charles’ assertion of the Divine Right of Kings in his attempt for absolute power. Thus, Kent draws the comparison of  Charles’ reign to that of the religious leaders of the new Puritan state.

The Heretic’s Daughter is a richly layered story, worthy of time and talk.