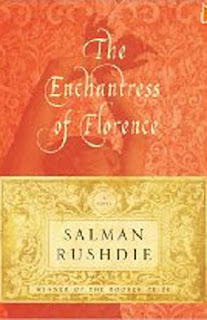 Those of you who have been reading BBB for awhile know that I have recently acquired the ability to put down a book that I don’t feel is worth my time finishing. Salman Rushdie’s The Enchantress of Florence may have been one such book had it not been for the fact that it was written by, well, Salman Rushdie.

You see, while there is this side of my brain that has rationalized not wasting time with some books, there is the other side of my brain that says if I’m going to consider myself ‘well read’ there are some authors that I need to have finished at least one of their books. Rushdie fits that criteria.
Rushdie hails Enchantress as his most researched book, and maybe that is part of what is wrong with it. A mixture of historical fiction and fairy tale, Enchantress spans countries and continents with no less than a couple dozen characters. (Wikipedia lists 37 historical figures included.) Their names (some characters have many) and stories are intertwined with such complexity that it is just thick and hard to follow.
In general terms, Enchantress is about a traveling stranger who ends up in the court of Abkir the Great of India (16th century) claiming that they are relatives and to prove it, begins telling the story of his (the traveler’s) mother, namesake of the novel.
There are two not so subtly stated themes near the end – ‘forging a union between the great cultures of Europe and the East, knowing she has much to learn from us and believing, too, that she has much to teach‘ and ‘the curse of the human race is not that we are so different from one another, but that we are so alike‘ – which I’m sure could be gleaned somewhere in the monotony of the narrative.
An interesting thought about the reading of this book, similar to my experience with Tropic of Cancer, the story actually becomes engaging and begins moving at a decent pace in the last 50 pages. It is as if the author realizes it is time to go and so he must finish his tale without superfluous detail, which then offers the reader decent narrative.
However, for me, this wasn’t enough to redeem the book. These are ten days I’ll never get back.

6 Replies to “Book Review :: The Enchantress of Florence”