Yes, I’m back to catching up. It has been a whirlwind the last three to four weeks which has included shooting three weddings, an anniversary trip to NYC and week+ of birthday celebrations. All this means that there hasn’t been a lot of reading going on.

I did finish (finally) Alice Munro’s collection of short stories, and the last two were just as grand as the rest. In fact, I think the next to last story – Tricks – was my favorite. There is an obvious parallel in it to Shakespeare, and for whatever reason, the ordeal of the main character really spoke to me. Quirks and all.

So, I’ve just started The Help, and so far it looks promising. This debut novel by Kathryn Stockett, an Atlanta resident, has gotten rave reviews from many sources. Stay tuned.

So then there was NYC….this is what I did while I was there…. 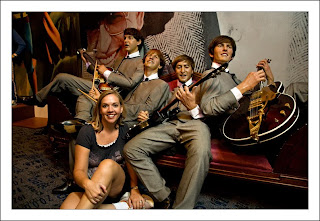 Yep, I spent some time hanging with the Beatles. There was a lot more to this trip, but for those pictures, I refer back to the fact that we’ve shot three weddings in the last four weeks, and so the hubs is busy doing actual work as opposed to wifey’s work.

Wolf Mountain is a quaint little winery in the Northeast Georgia mountains. There are a few around the area, and as much as I enjoy wine, I can’t believe I haven’t tried them all. But anyway, this one hosts a Sunday brunch buffet, which was really nice. The very best part of it for me, though, was the artisan cheese course that was leftover from an event the day before. I had two – courses that is. I love cheese… and the smellier, the better. Smells like goat’s feet? It is bound to be delicious!

A close runner up to the cheeses was the peach and yogurt soup. Again, this was an appetizer & dessert. Yum. Here are a few photos from the brunch & location. (Thanks, Bunny!)

Other birthday celebrations have included a couple of dinners out and a trip to Toccoa to relax at my parent’s house. And currently, I’m thinking I’ll continue to stretch it to this weekend by redeeming one of the massage gift certificates…

One Reply to “Back to Catching Up”