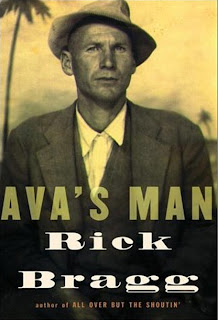 I think I loved Ava’s Man so much because I have a Charlie.

Ava’s Man is Rick Bragg’s memoir about his grandfather – whom Bragg only got to know through stories told to him. It is also a story about the South, about how things are different here – or at least used to be – and the people who are as colorful as a patchwork quilt.

Charlie is one of those folks. A roofer by trade and bootlegger by night, Charlie is haunted by revenuers, ‘likker’ and occasionally the Law. Charlie has a internal sense of what’s right, wrong, fair and unfair – and while his neighbors and the men he drinks with understand it – officers do not.

Told in intermittent episodes in the same Southern tongue Bragg would have heard the stories being told in, you can almost hear his aunts and uncles prefacing each chapter, “Do you remember the time when…?” Bragg does an admirable job repeating the language. 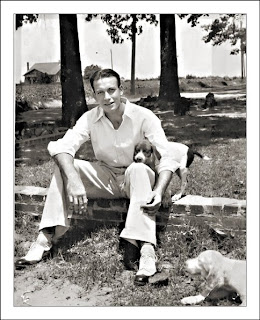 And so as I was reading about Charlie, my mind constantly went back to my Charlie – Big Wayne – my grandfather, whom I also never met, but have grown to know because of the stories I’ve heard about him – stories that aren’t too different from those Bragg told. Stories about drinking and standing down revenuers and operating according to your own sense of justice, whether it matched the law or not.

And I also realized this – men like Charlie and Big Wayne need books. It isn’t fair just to tell the hard stuff. You’ve got to include the softer things like Big Wayne pulling my mama up on his lap and singing to her. Yeah, like Charlie, Big Wayne loved his little girl, and she knew she was special. And it takes a book to do all that.

Like Charlie, Big Wayne didn’t go to church. But he made sure the children did, and when the church needed land, Wayne followed in his own father’s footsteps and gave it to them. Big Wayne’s religion was found somewhere between a starry sky and the red Georgia clay.

I think the other part of what I really liked about Ava’s Man is that it captures a piece of the South that I know, but that I also know is on its way out. I know about turtle stew and the meaning of “I’ll be home directly,” but I doubt my children will. But I’ll save what I can – like catching lightening bugs in a mason jar – and do my best to keep it all from dying off.

And of course there’ll be stories. They’ll learn how we keep folks alive – like Charlie and Big Wayne – by telling stories.