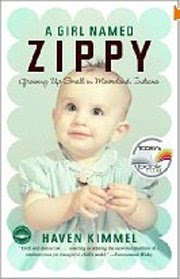 I just finished A Girl Named Zippy, and I was a little bit disappointed. The person who recommended it to me had it listed among her top 10 books ever, and typically we’ve been pretty eye to eye on books.

Let me summarize: Zippy is growing up in small town USA (Mooreland, Indiana to be more precise). There isn’t a plot, but instead, the book is a collection of snapshots (and literally each chapter begins with a snapshot) of what it is like to grow up in a small town. The read is appreciated for its universal nature. And indeed, I did find myself chuckling at common experiences. A few of them include:
I can see where a discussion of this book would make its enjoyment all the better because of the additional shared stories among the group.
This book wasn’t horrible, it just wasn’t a “five” for me – maybe 3.5. I will say that it was a stark contrast after Perfume – 180 degrees different. And perhaps I didn’t enjoy it as much because the scent of Perfume was still with me. (Sorry, I know that was corny – I just couldn’t resist.)
***********
(SPOILER ALERT)
I did finish One Thousand Women while at the beach, and it did get better. For one thing, there were more journal entries than letters, and so I was able to give up that irritation. But I never quite got the complete feeling that May was immersed in the tribe. It had an “I’m off to summer camp” feel for me. But, I was able to look beyond this & focus on the story, which I did enjoy.
Ultimately One Thousand Women is a tragic story. May is betrayed in some fashion by all three of the men she has loved. This in itself would lend itself to a great discussion.
Her child, which was fathered by the Captain but raised by the chief offers another interesting point for discussion – is that point believable? I’m not sure. On one hand, the Cheyennes were very superstitious & so their explanation of the white female messiah is somewhat plausible, but on the other hand, I’m not sure the women had been there long enough for the Indians to trust them to the point of the Indian chief being so blatantly dishonored.
As far as my preference for Follow the River and not feeling the narrator’s voice was authentic, my mom pointed out one major difference and perhaps and perhaps the reason for the contrast – the woman in Follow the River wanted to leave; May didn’t.
In the end, I give One Thousand Women a three.
***********
Finally, Scott & I rented Perfume the movie this weekend. They did a pretty good job with it.
The day that I finished Perfume, Scott & I went on a long walk where (feeling pretty sure he wouldn’t read it) I told him the whole story. When I finished, we commented on what a great movie it would make. And indeed IMDB showed it was a movie & a good one at that.
It is remarkable how a book and then a movie about scent can be portrayed. I’ll admit, though, had I not read the book, I’m not sure I would have gotten the movie. There were a few subtleties – like his mixing the scents of all the murdered girls – that I’m not sure I would have understood. And, I think the scene where he is brought in for execution is better revealed in the novel. But over all, a fair reproduction.