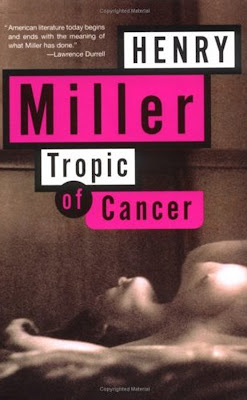 Most avid readers have that never-ending list of classics in the back of their head that fits the description, “I know I need to read that someday just to say I’ve read it.”

Henry Miller’s Tropic of Cancer was one such book for me. It is a memoir of part of the time he spent in Paris in the 1930’s. It was immediately banned due to its graphic content, and it spawned a trial it the US that would influence the future of banned books in America. Words associated with it were “revolutionary,” “illicit,” “remarkable” and “masterpiece.”

You know what? So were the emperor’s new clothes.

For my frequent readers, you know that I’ve recently adopted the habit of not finishing books that aren’t worth my time. This would have been one of those cases had I not be confined to a five hour flight between Atlanta and San Fransisco. I read all but 23 pages on the plane.

Millers exploits described in Tropic of Cancer – and I use the word described loosely here because he writes in stream-of-consciousness – are self-indulgent, vulgar to excess, chauvinistic beyond compare and totally narcissistic.

There is no plot. There is no continuity of characters. There is nothing that ties this work together from start to finish, save the theme of sexual encounters with prostitutes (be they in profession or action).

In fact, the last 20 pages of the book – which I read only because I was so close to finishing – actually have a bit of a story line and one half-developed character, which left me wondering where in the world this bit came from.

I’m trying to think of what else there is to say about it, and quite frankly, I’m speechless. I guess the only way to wrap this up to say that it would have been a favor to all had Tropic of Cancer remained banned.

2 Replies to “Tropic of Cancer:: Where do I start?”