Serpas(accent on the PAS) is a fairly new restaurant on Auburn Avenue that my husband and I had the privilege of enjoying Friday evening. Chef/owner Scott Serpas is a Louisiana native, and his menu reflects his heritage, which is not (as our waitress pointed out) creole or cajun – just Southern. Chef Serpas resumé includes the influence of Gerard Maras and Kevin Rathbun, and venues including two of my favorite local eatery’s – NAVA and Sia’s.

My first impression of Serpas was that the place wasn’t sure of its identity. The dining room is the shape of long triangle (which I must admit, all the long, leading lines pleased the photographer in me), with one leg (wall) consisting of exposed brick and the other, a wall of glass window, broken only by silver mullions. Wood table tops are surrounded by silver painted straight-legged chairs. And so I was confused – was this contemporary or urban preservation?

However, after perusing the menu & noticing the short leg of the triangle was a floor to ceiling macro photograph of cotton bolls, this restaurant is not confused – it is a classic meeting of Old South with New. 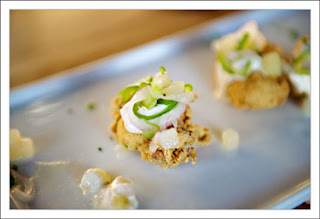 I only got so far down scanning the line of appetizers when I realized my partner and I would have to share a few of those & limit ourselves to one main course. So, our fare for the evening consisted of the Serpas house salad, eggplant hushpuppies, fried oysters, jumbo sea scallops and the ice cream sandwich.

The house salad was topped with blistered grape vinaigrette & if you’re wondering what blistered grapes are, they’re skinless & roasted. Different & yummy! As for the hushpuppies, think eggplant parmesan – a personal favorite. They were even topped with “red gravy” – fresh marinara.

The recommendation for this venue came with the claim that the fried oysters were the best in town, and they didn’t disappoint. Topped with pickled chiles and mirliton – (I had to look it up, too; it’s a popular southern Louisiana food & sometimes recognized as either squash or pear) – the oysters were an excellent blend of soft, crispy and flavorful.

This was the point in the meal where we realized we had a camera with us & could photograph the food! See it’s pretty and tasty (and half gone)! 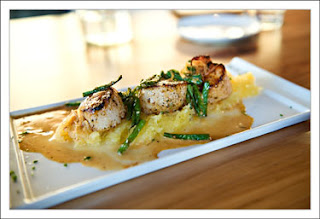 Finally, the scallops of our main course were perfectly seasoned & seared, served on a bed of spaghetti squash and drizzled with the most sumptuous panang curry sauce. While the curry would have typically been a bit too spicy for my hubby, he said it was so delicious, the heat didn’t bother him.

Forgive a brief interruption about the food, but in an honest critique, I must say that this was the point in the evening where half of our fellow diners began using both hands to enjoy their dinner. Remember the wall that is a window? Well, it faces west, so for the better portion of our dinner, those in the dining room facing the window were blinded by that beautiful thing we’ve seen so rarely these days called the sun. (Scott & I are one of those sappy couples that sit on the same side of the table / booth, so we had our backs to the offense.) This was a clear over-site in the design, and an element I can’t see the management not trying to rectify with low-profile shading.

Now, back to our finale that truly was the type of dessert that would instigate a return to Serpas – an ice cream sandwich made with coconut white chocolate macadamia nut cookies topped with a citrus reduction that is the perfect tart pairing for the sweetness of the vanilla bean ice cream. One note if you do happen dine here & try this sweet sandwich (& Babbette hopes you will), eat it with your hands. That’s what we do in the South – but do your best to sop up all the sweet, citrus goodness. 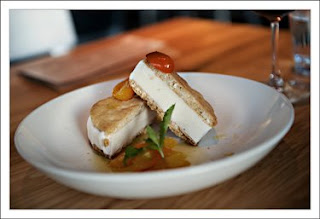 Noting that my last restaurant review was critical of the service, and there’s been no mention of it here, I say it was what it should have been – casual, natural, pleasant and unobtrusive. Good service is like a well punctuated sentence – used appropriately, it goes unnoticed; err, and it hinders its purpose.

In short, Serpas is delightful addition to the Atlanta culinary scene and is sure to quickly become a neighborhood favorite. (Did I mention the patio seating or the impressive bar?) We got out for less than $80; so particularly at that value, we’ll be back, and next time we’ll bring friends.