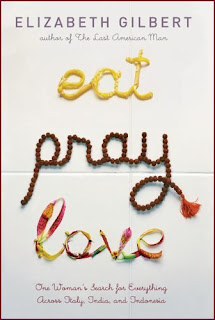 Let me start by saying that I’m glad I read this book. I’ve been hearing about it for at least two years, and it has a bit of that cult-like contemporary fiction notoriety, so I felt I needed to. I do have some issues with it, but first to the good stuff.

For anyone who doesn’t know, the subtitle is ‘One woman’s search for everything across Italy, India and Indonesia.’ It’s a memoir of sorts by woman who takes a one-year sabbatical from life, really, and lives for 4 months each in these three countries. The title summarizes her life in each country: in Italy, she eats pasta (and gains 23 lbs.); in India she visits the shrine of her Guru and spends hours each day in prayer; and in Indonesia, where she goes to learn from a medicine man she met a couple of years before, she gains love.

There are several very specific ways that I can identify with Gilbert. She’s recently divorced; even more recently free of a completely unhealthy, post-divorce relationship; and she’s a control freak. To borrow a phrase from Gilbert’s time in Italy, I’ve been there. I know what it feels like to so desperately need to rediscover who you are in the wake of two relationships gone bad: a divorce and that inevitable hastily sought train-wreck relationship shortly thereafter. (Why throw in ‘control freak’ instead of what, ‘brown hair,’ perhaps? Because there are few things that can make you feel more out of control than a divorce and the aftermath thereof.)

There’s a quote that I love from her time of feeling like she’s lost of self. She describes a moment when she’s caught a glimpse of her reflection in a building window, and she mistakes her own face for that of a familiar friend. When she realizes (in embarrassment) her error, she says: Never forget that once upon a time, in an unguarded moment, you recognized yourself as a friend.

She has similar breakthroughs throughout the book that help her to heal her heart, mind & spirit. And, she meets incredibly colorful characters as well. This is the essence of Eat Pray Love.

One of the primary reasons for her journey is to find God. She describes a moment before her divorce where she is literally crying out to God in prayer, and her sense of Him as a result is what motivates her journey.

Which leads to where I have issues. The search for God is a great and noble thing – many great writers have done the same thing. It is Gilbert’s assertion of the God she is seeking that I take issue with. She says that the God she seeks is the God of Muslims, Hindus, Islam and Christians. “I could just as easily use the words Jehovah, Allah, Shiva, Brahma, Vishnu or Zeus.” Not true.

OK, so I disagree with the premise. What’s the big deal? The big deal for me is this idea is pervasive in our culture today. The politically correct tenet says it doesn’t matter which religion you believe in, they all will get you to the same place. This is not what Christians believe, and I fear that some who are Christians, if they don’t know well what their faith is based on, can easily be mislead because they don’t know why it can’t be true.

Christians (and to be clear I’m talking about Christian by faith, not Christian because you were born to parents who had you sprinkled in a church when you were a baby) believe not only in the God of the Old Testament, but also in Jesus – the Messiah – whose life and words are recorded in the New Testament. If you believe that Jesus is the Messiah, Son of God, then you believe what He said is true. And, Jesus said, “I am the Way, the Truth, and the Life; no one comes to the Father except by Me.”

Gilbert’s book is full of a lot of things that sound really great – even to Christians – and indeed there is a lot of truth in her book; but that truth is so wrapped and intertwined with untruth, that at times it is hard to decipher between the two.

I’m not a Biblical scholar, and so I won’t go further into other ideology she purports that I disagree with. I’ll leave you with this: for those who choose to read, be careful what you accept as gospel.