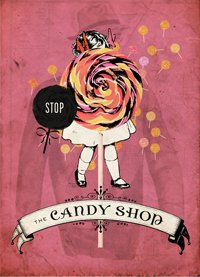 Approximately 500 girls age 14 or younger are raped for profit every month in Atlanta.

This is one of the facts that, according to Brandon McCormick, “Once you know, you can’t un-know.” And so, McCormick and his independent boutique film company, Whitestone Motion Pictures, have made a short film, The Candy Shop. I was honored to be among the 4,000 to attend the premier of the film Monday night at the historic Fox Theatre.

The Candy Shop was created to bring awareness about the sex trafficking industry. It is a metaphor in the form of a fairytale where little girls are lured into a candy shop, turned into candy and then sold (or given if a man desires a first taste) to men who frequent the shop.

The movie was made in collaboration with StreeGRACE, a non-denominational alliance of churches and community partners whose mission is to eliminate the commercial sexual exploitation of children (CSEC). After the preview of the film, Ernie Johnson hosted a panel discussion of Dale Alton, executive director of Georgia Care Connection; Alex Trouteaud, Ph.D., lead CSEC researcher for The Schapiro Group; Brandon McCormick; and Doug Jones, lead actor in the film who each talked about their passion for the project. One of the poingnant moments of the evening for me was when Dr. Trouteaud spoke of the early days of their research when they were trying to learn the numbers related to the demand side of the issue. He posted an ad on the internet offering an under-age girl for sex, and within minutes he had dozens of inquires.

Atlanta has been identified as one of the leading cities for sexual exploitation of children. As a Georgia native, this is shocking and sickening. The victims and perpetrators cross all lines of race, socioeconomic status, background and educations. This is not a issue for just the poor, homeless or immigrant. I recently heard where frat boys were being encouraged to lose their virginity by visiting “massage parlors” where young girls are often sold for their services.

If you think this problem is bigger than you – too big for you to influence, you’re wrong. Visit Stop The Candy Shop for five simple call to action steps. By acting on any one of them, you are standing up and saying, “This is not OK in my city.” There are organizations who need your donations, money and time. On February 1, StreetGRACE plans to have 2,000 volunteers at the State Capitol to lobby legislators to support bills that will help end sex trafficking.

For a trailer of The Candy Shop, see below. If you live in the Atlanta area and would like to see the film, 12Stone is hosting two showings on November 21 at 5 p.m and 7 p.m. at their central campus. For information, go here. Tickets are free, but required. Also, the film is PG13 and 12Stone is enforcing that.

The Candy Shop Trailer from Brandon McCormick on Vimeo.

If you are a blogger, you can do something by writing about this issue or linking to this post on your blog. Stop the Candy Shop should have buttons up soon for you to use on your sites. Research the issue in your local area to learn what is being done locally to bring an end to this tragic epidemic. There souls counting on you.

2 Replies to “STOP the Candy Shop”