We invite you to share with us a book or genre you tried due to the influence of another blogger or reader. What made you cave in to try something new and what was the experience like?

I am one of those readers who is very guilty of not getting out of my comfort zone. Even in my quest to read more non-fiction, I’ve chosen books like Ava’s Man and Half Broke Horses that read more like novels.  Not this time.

Audrey is one of my sweet book club sistas. When she hosted a couple of months ago, I learned that she is a huge history buff and loves to read historical non-fiction. (See, I don’t even know enough about the genre to know what it is really called…somebody help me out here.) In recognizing my own shortcomings in this area, and at the same time totally respecting her opinion, I asked for a recommendation. 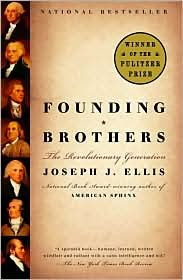 Well, she walked me over to her huge bookshelf lined with massive and incredibly intimidating 1,000 page volumes on the leaders of France, England and America. But before handing me something that weighs more than Annie, she plucked this little 250 page gem from the rows and handed it to me: Joseph J. Ellis’ Founding Brothers: The Revolutionary Generation.

Winner of the Pulitzer Prize for History in 2001, Ellis focuses on six crucial episodes in the founding of our country that readers may have heard of, but have not truly understood for their significance. Included are Washington’s farewell address, the dual between Hamilton and Burr, the private dinner party Jefferson hosted to negotiate the permanent location of our nation’s capital and others. What emerges is a depiction of the men typically known as our Founding Fathers as brothers – loyally bound by their common and epoch history but hugely divided in belief and motivation.

This being my first read of the genre, I learned a ton. Echos of Mrs. Sander’s US History class haunted me, but I gained a new and clear appreciation for our country’s foundation. A couple of things stood out to me. For one thing, the current debate over federal supremacy vs. state’s rights is nothing new. While I knew this, I have a new appreciation for it. Those men who argued for federal control felt a deep sense of hypocrisy. In wanting government to have final say they were purporting the stance that they had just ten years before fought to overcome – Britain’s dictatorship of America. In fact most all of them in writing the Constitution felt some degree of this.

Another interesting topic was that of slavery. This chapter is called “The Silence” because that was the preferred method of dealing with the issue. While none of these men saw slavery as a part of America’s future, no one could come up with a reasonable way to abolish it. An early compromise had established 1807 as the year when the topic would be brought up again for discussion, and so most men, regardless of conviction, were unwilling to push the issue prior to this. And do you know why? Not because of offending the Southern delegate, though that was an issue, and not because of money, though the expense of compensating farmers for their lost assets was a real concern. It was ignored because abolition would mean assimilating slaves into American culture, which would most definitely mean eventual intermarrying with whites, and no one – not even the Northern delegate who so pompously looked down their noses at their slave owning peers – could imagine America as a mulatto race. Fascinating.

I also enjoyed getting to know these men on a personal level. Their lives, as seen in the very personal relationships they had with each other, portray the real human – the man who struggles with pride or hurting a friend’s feelings; the man who can’t stand to be away from his wife; and the man who can’t stand to see two friends at an impasse. I feel like I know Jefferson, Adams, Washington and Hamilton like I never have before.

Founding Brothers was an excellent, excellent book and has created for me a desire to read more history. Thanks, Audrey, for the loan and the recommendation!