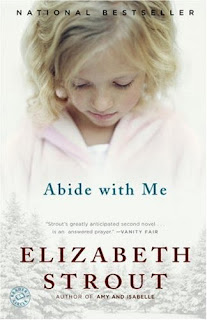 My second Elizabeth Stout read of this year behind Olive Kitteridge, Abide with Me was a little disappointing. That said, it isn’t bad – it just wasn’t Olive.

Abide with Me is the story of Tyler Caskey – a young minister who has come to a small town in Maine to live out his passion. Unfortunately, it wasn’t his wife’s calling, who has passed away when the book begins, and Tyler is left with the aftermath of her offense to his congregation as much as he is dealing with the responsibility of two small children who have lost their mother.

The conflict kicks off when his five-year-old daughter begins acting out in Sunday school and then stops talking altogether. The pressure to act, be and perform confines Tyler from every side. He wants to do well by his parishioners, but knows he must also do right by his daughter. At the same time his mother (who is keeping his infant daughter) is hounding him about getting back into the dating game. He’s a guy who can’t seem to please anyone, except maybe his housekeeper Connie, whose own troubles with the law bring even more speculation to Tyler’s affairs.

This is not the first time a novelist has taken on the human side of ministers or explored the public vs. private life ironies of the religious, so parts of Abide with Me felt familiar. Due to all the upheaval in my own life (selling a house, shopping for house, moving into temporary housing) my experience reading what should have a been a quick read wasn’t as consistent and concise as I’d liked it to have been. And, I do believe this had an impact on my enjoyment. Also, because Olive was such a strong character, I couldn’t help constantly comparing Tyler to her and realizing he just wasn’t going to rate as high on the memorable scale.

A friend recently loaned to me Amy and Isabelle, Strout’s first novel and what first drew me to her, and despite my so-so feelings about this one, I’m really looking forward to it.