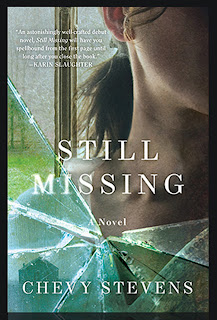 Still Missing is the perfect novel for people (like me) who would give anything to spend an evening and a bottle of wine with Elizabeth Smart.

Chevy Stevens’ debut novel is the story of Annie O’Sullivan who escaped after spending almost a year in captivity in the hands of a psychopath. Each chapter is a session with her psychiatrist. The quality of writing is amazing in that Stevens gives Annie a remarkably authentic and believable voice.

Annie O’Sullivan was a real estate agent conducting an open house when a seemingly interested buyer appears just as she is wrapping up. He kidnaps and drugs her, and when she wakes up, she is at a remote cabin deep in the woods. She’s unsure of how long she was out, and so has no idea of how close or far she is from home.

Her captor has serious mental issues. He forces her into weird rituals and schedules, for example only allowing her to use the bathroom at certain times. (When she is free, she still suffers from an inability to “go” at will.) Each night he bathes her, coats her with lotion and puts her in conservative dresses before he rapes her. She does become pregnant, but I won’t spoil what happens to the baby and how she escapes for those who do pick this up to read.

I was totally caught up in her experience and specifically the emotions of coming back to her life and the people waiting for her. She has a particularly hard time with the media who want to pay her to share her story; she can’t understand making money off an experience that was so horrible.

If this weren’t enough of a story to keep a readers attention (and for me, it would have been – it is just that good), another story begins to emerge. It is the reason and source of the kidnapping in the first place.

There are parts of this that are hard to read, not unlike Lovely Bones or similar reads that deal with hard topics. But if you can handle that, this is a fascinating story of a survivor who grapples with every emotion in order to recover from the feeling that she is “still missing.”

Still Missing will be available July 6, 2010. I was graciously provided an advanced reading copy by Sarah at St. Martin’s Press. It has also been listed as a great summer read by O! Magazine, Good Morning America and People magazine.