Many apologies to my readers as I’ve been a slack blogger of late. I’ve had three posts that I’ve needed to write (including the one from yesterday) and so each time I sit down to read, which hasn’t been very often quite frankly, I feel guilty for not writing. But, I’m doing my best to catch up. There’s another post scheduled for tomorrow.

What’s been going on you ask? A variety of things. Some of them just the usual – busy at work, busy at play. Some of them not so usual – my husband and are in the process of selling our home, looking for one to buy, cleaning out, packing, preparing for a move. Because of the empending move, I’ve tried to refrain from requesting or accepting any new ARCs, which is at least helping to slow the pace of my growing TBR pile!

I was recently elected as president of the woman’s affinity group at work. It is a huge honor – we have over 1000 members – but since this is the start of our year, it is requiring  good bit of work to get the year going. Here I am with the outgoing president and the parliamentarian who inducted me. 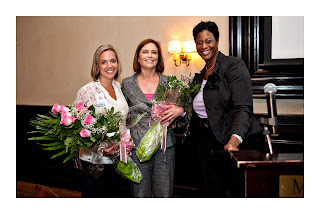 Also, a reminder that TODAY is the last day to sign up for the giveaway of Still Missing. I’ve been completely overwhelmed by the number of folks who are interested. So, thank you! I’ll be posting the winners early next week.