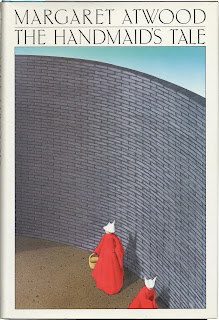 Margaret Atwood’s award winning The Handmaid’s Tale is the type of novel that is so full, so rich with material, it is almost hard to know where to start talking about it.

Atwood’s dystopian novel portrays a world where women have been clearly sectioned off into a few limited roles: – Martha’s (household maids), the Aunts (head mistresses of the girls’ schools where they are indoctrinated), Wives (married to Commanders – the powerful men), and Handmaid’s (concubines of the Commanders.) This is the story of one handmaid – known as “Offred,” not because that is her name, but because her Commander’s name is Fred – she is “of Fred.”

In addition there are “Unwomen” – women who are infertile, gay or have some other “serious” issue that makes them unsuitable for one of these other roles. These are sent to colonies to live – a place feared because it is unknown and isolated. Late in the novel the reader discovers a less publicized element of women – the Jezebels (prostitutes) – who ironically seem to have the most free and viable of lifestyles.

The rate of birth defects is very high and of course these babies are destroyed. There is a wall where dissenters who have been executed are put on display. Offred walks by this wall every day on her way from the market, looking with dread but expecting to see her husband from “before.” Her daughter from before has been taken to be raised by another Commander and his Wife – the appropriate place for a child born to an illegitimate union since Offred’s husband was divorced.

Offred’s responsibility as a handmaid is to provide the Commander and his wife with a child. There isn’t much detail about why the wives can’t do this, but there is a sense that carrying a child is too dangerous a task for a Wife to complete. However, the Wives do take part in both the sex and the child birth in really weird ways that you’ll just have to read to discover!

What I really liked about this dystopian novel is that Offred remembers “life before.” She’s a first generation handmaid, and the reader has a sense that this life is just around the corner. The description of how this came into being is pretty creepy – there’s basically a coup in Washington where the President and all of congress are gunned down. An alternate army is ready to step in and restore order (a new order at least).

Before I scare any of you away, this is not a book of revolution and violence. This part is a “must have” because the reader is thinking, “How can we go from life the way it is now to something so drastically different?” So, this is how Atwood answers the question.

Biblical allusions abound. In addition to the Martha reference to the New Testament woman who bustled around taking care of the house while her sister sat at the feet of Jesus, the new society that is created is the Republic of Gilead, the Sons of Jacob were responsible for the overthrow of the government, and the school of indoctrination is the Rachel and Leah Center – all Old Testament references. Simply put, these allusions can be summed up as Atwood’s criticism of conservative Christianity.

More interesting to me is the study of women and their relationships with each other. Competition seems to exist regardless of the differences or similarities in status. Women are constantly pitched against each other and feel they must vie for maintaining their place. While this is understandable between Wives and Handmaids, it seems especially cruel and unnecessary between the Handmaids and Marthas. The few instances when kindness is shown appear dangerous, but offer the only glimpse of hope in this dark portrayal of a future world.

An superbly crafted story of warning in its extremes, The Handmaid’s Tale is well worth its accolades and would be an excellent subject for book group discussion.