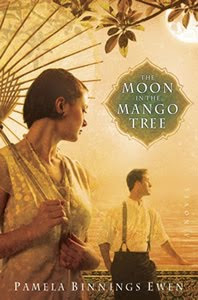 Pamela Binnings Ewen’s third novel takes a personal turn as she tells the story of her grandmother in The Moon in the Mango Tree. Barbara Bond was a young 1920’s suffragette when her new husband returns from the war and announces that they are moving to Siam – more specifically to a remote village that isn’t even on the map. He’s a physician, and a Presbyterian mission has found a place that needs him.

So, fresh in their marriage, the two move halfway around the world so that Harvey can fulfill his purpose. However, leaving for Siam means that Barbara must give up her dream of becoming an opera singer – one that she is on the brink of realizing. In Siam they suffer all the things you would imagine – dangerous animals and disease, primitive living, and culture shock – both from that of the natives and of the existing mission workers.

While Harvey’s skills as a physician are welcomed with open arms, the one thing Barbara has to offer to the mission – her music – is shunned as an extravagance equal to any other carnal sin. When a neighboring village is struck with disease, Harvey announces he’s leaving for several days to try to help. While he’s gone, torrential rains come and Barbara is overwhelmed with loneliness and resentment at Harvey not returning immediately. When he does return, neither share their individual tough experiences.

Even though this is only about a third of the narrative, I hope this is enough for you to get the gist of why I disliked this book. First, there was no sense of love between Barbara and Harvey. They don’t communicate – making Harvey look like a domineering jerk and Barbara, a sniveling whiner. While I realize the point of the book is to show the struggle women have over duty to family or personal dreams, their relationship was never depicted in a way that made me care about either character, much less if their marriage made it. Later in the story when Barbara decides to leave Harvey in Bangkok and move to Italy to explore her dreams, while I don’t agree with her, I don’t fault her. But in truth, I really didn’t care.

And if the issue with the characters wasn’t bad enough, I resent stories that set up religion in one of two camps – the fundamental extremists who are completely unloving and lacking grace and the wishy-washy, free-love, new agers who embrace every way as a means to nirvana. While in Siam, Barbara struggles with her faith and this seems to be her only two options. By the way, her struggle with faith is never really resolved – yet another shortcoming for me.

I typically shy away from novels described as Christian fiction, as this one is. My experience has been that the writing is poor, the characters are undeveloped and the narrative is lacking. As a Christian, I really hate this. Unfortunately, The Moon in the Mango Tree lived up to all of these expectations.

5 Replies to “Book Review :: The Moon in the Mango Tree”