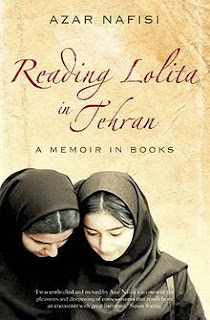 I was misled about Azar Nafisi’s Reading Lolita in Tehran. Since it was published in 2003 – and from what I remember, it was all the rage for awhile – I thought it was about a woman who got a group of girls together, a book club of sorts, in Tehran. I was wrong.

Beginning in the early 1970’s, Nafisi narrates her experiences living through the revolution in Iran as she taught literature at the University of Allameh Tabatabei. She uses interludes of her life to expound on her thoughts on writers including Nabokov, Fitzgerald and Austin, making much of her narrative read more like critical analysis than biography.

I don’t get why this book was so raved about. Since I’ve already used the analogy of the Emperor’s New Clothes to another book I disliked, I’ll refrain from using it again, but seriously? What is the intrigue of this story?

It took me about three discs (of 16!) to realize that the premise assumption I had for this book was not the correct one. At that time, I tried to retrain my thoughts and accept this purely as a memoir and thus appreciate it so. But. I. just. got. bored. And so I must admit that I skimmed as much as I could of the last four discs.

It portrays the plight of freedom and females in a religious dictatorship; gives a gruelingly detailed account of 30 years of changes in the political landscape; and waxes on and on with literary commentary that I would have been completely lost during had I not read the books at hand. I understand the need for educating women (like me) who have been lucky enough to grow up where human rights are not violated simply because of gender. But is that it? After that, what is all the hype about?

I think I really would have enjoyed a book that had been more about the girls in her book club. But as it is, I can’t even distinguish them from one another. I’m sure there is an element of not revealing too much in order to protect their identity, but leaving their stories lacking makes this book less of what it could have been.

5 Replies to “Book on Tape Review :: Reading Lolita in Tehran”