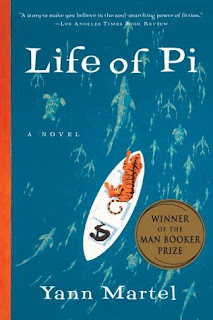 I feel like I’m the last ‘reader’ to experience Yann Martel’s Life of Pi. I was sent a copy of Martel’s newest novel, Beatrice and Virgil, recently, but I wanted to read Life of Pi first. Some how, in all of the “this is a great book!” hoopla, I missed hearing what the book was about. I’m glad I did, because I’m not sure if I would have picked it up had I known.

For the two of you left who haven’t read this book, Life of Pi is the story of a young 16 year-old boy from Pondicherry, India in the 1970’s. His father is a zoo keeper, and the first part of the book tells the story of his life in India, the philosophy of zoo keeping, and how he came to ‘claim’ three religions – Hinduism, Islam and Christianity.

The second part of the book, and the bulk of the story, is about his survival of a shipwreck and 200+ days at sea in a 30-foot life boat with a 450 lb. Bengal tiger named Richard Parker. Initially, there are also on the boat a zebra, a hyena and an orangutan. They don’t last long. And in fact, Pi is unsure that he can survive with Richard Parker either, but soon comes to realize that he also can’t survive without him.

The book wraps up with their arrival on the coast of Mexico, and interview with executives from the company who owned the boat that sank and a few brief notes about life after survival.

While it may seem like the trials of a boy at sea with a tiger would get old quick, it doesn’t. Pi’s story is varied and engaging. He alternates among his physical, emotional and spiritual needs, anguish and satiation. Since I experienced this as an audio book, I’ll also add that I loved the narrator – a young man with an Indian accent. I am sure that this contributed to my ability to stay engaged with Pi’s story.

But the audio book also made parts of it hard. There were some really gruesome descriptions in the narrative, and had I been reading the physical book, I probably would have skimmed these parts. I couldn’t do this with the audio version, so I will say that there were parts that made me shudder.

Just in case the couple of you who haven’t read this stumble upon my post, I’ll “hide” the part of my discussion that contains spoilers. (Text is in white, so select the seemingly white space with your cursor to read.)My heart sank when Pi told the second version of the story. I guess we are supposed to believe that the non-animal version is what really happened, but I really don’t want to. I want to believe that he made up that story to satisfy the men who couldn’t accept Pi and Richard Parker survived together. If we are to believe the second story, then I would argue that Pi and not the French man is Richard Parker. Four animals; four humans. The French man can’t be both they hyena and Richard Parker. That’s a little ambiguous. And, it makes for an interesting discussion of comparison given all the descriptions Pi gave of the tiger.

One of the losses of coming to a book too late is that you miss opportunities to discuss when everyone else is reading it. I definitely feel I’ve missed out on this one.

All in all, a well crafted story and worthy of the Man Booker Prize it received in 2002.