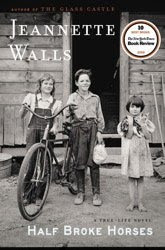 For those who have not read The Glass Castle by Jeannette Walls, Half Broke Horses (called a true-life novel) is a good read about a true pioneer woman who survived a tough life in the American desert west.

For those who have read The Glass Castle, this second novel, a biography of Walls’ grandmother, the spunky Lily Casey Smith, explains the frustrating character of Jeannette’s mother from her debut. I happen to be in this latter camp.

I loved The Glass Castle, but when I finished, I was angry at Jeannette’s mother, Rose Mary. It seemed to me she had the resources to pull her family out of their poverty, but because of pride, mental illness and a stubborn love for their no-good father, she refused to do so. While Rose Mary doesn’t make her entrance until more than half way in, getting to know Lily, her mother, helps to explain (but not forgive) Rose Mary’s apathy.

Lily was raised hard. Born in a mud house, she survived floods, tornadoes and yellow fever. Her father raised and sold horses; so, at a young age, Lily was given charge for helping break them. Precocious, funny and headstrong to a fault, Lily goes from one challenge to another as she helps her brother and sister survive their upbringing, sets out on her own as a school teacher at age 15 and eventually travels to Chicago for city life in her early 20’s.

A failed marriage sends her back to the west where she finds a partner in marriage to Jim Smith, a reformed Mormon. Together, they manage a 100,000 acre ranch – a physically and mentally hard life – until war and drought drive investors looking for something new. Over and over, Lily proves her resourcefulness and love for life.

Despite a similar childhood, Rose Mary is nothing like her mother. With no stomach for killing animals and a penchant for the arts, mother and daughter wrangle at almost every turn. This gives Rose Mary a rebellious spirit, so when an alcoholic and scheming Rex Walls catches her eye, there’s nothing that seals the deal for Rose Mary like knowing her mother doesn’t approve.

While I really enjoyed the story and getting the background for The Glass Castle, experiencing this as an audio book was a little painful. I’ve said before that if an author is a talented writer, chances are they are not a talented reader. And quite frankly, no one expects them to be. (There are some exceptions.) This audio version is read by the author, and it definitely fits into that category of “shouldn’t haves.”

So, I give Half Broke Horses a high recommendation, especially for those who loved The Glass Castle. But, you may want to do yourself a favor and pick up the hard copy.

3 Replies to “Book on Tape Review :: Half Broke Horses”