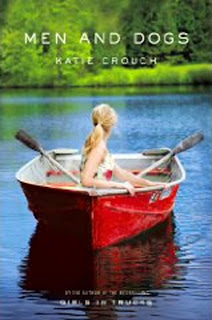 I haven’t read Katie Crouch’s Girls in Trucks. It was one of those peripheral books I heard about here & there – good things at that – but just never got around to picking it up. So, when I saw her next novel, Men and Dogs, I knew I needed to read it.

In Men and Dogs, Hannah Lagare has been moving through life without really getting over her past. When she was 11, her dad disappeared. While “officially” he was reported dead, there was never concrete evidence of this, and so Hannah has never truly accepted that story. Now her husband has kicked her out of their posh San Francisco apartment – due to Hannah’s repeated infidelity – and she finds herself back at home in Charleston for a “respite” in her step-father’s South of Broad home.

The time at home allows (or forces) Hannah to walk back through portions of her life to find the answers she needs to move forward. There’s the strained relationship with her gay brother, the handsome high school sweetheart she walked away from and of course her overbearing mother who re-married too quickly and too richly.

While I’ve been called one who doesn’t appreciate the lighter qualities of a good chick-lit read, I don’t think that’s true. Men and Dogs is to me the best sort of light reading. Quirky characters who may be slightly familiar, but surprise you at times. Funny episodes and clever phrasing. Even fairly insightful at moments. Crouch’s second novel is definitely worth picking up. It’s even good enough to inspire me to track down her first.

*********
This book was graciously provided to me by Hachette Book Group as an advanced reading copy and is due to be published in April 2010.