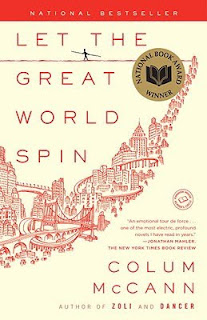 Colum McCann’s Let the Great World Spin may just be the best book I’ve read that I didn’t like. Winner of the National Book Award for fiction last year, McCann’s novel reads more like a collection of short stories about various residents of New York City whose lives are connected by a single event in 1974 – the day a tight-rope walker decided to walk between the World Trade Center towers.

First, what I did like. McCann’s writing is beautiful – poetic at times. Two examples:

“Family is like water – it has a memory of what it once filled, always trying to get back to the original stream.” (pg. 57)

And the writing is dense – it has weight. But what was lacking for me was an emotional connection to the characters – at least most of them. Keeping to the things I liked, I loved the character of Claire. Claire lives in a Park Avenue apartment (she refuses to call it a penthouse) and is married to an esteemed and Jewish judge. They lost their only son in Vietnam, and in a desperate attempt to connect with women who have experienced her level of loss, answers an ad in the paper. She invites her new club – which includes a black woman who happens to be the one Claire is drawn to the most – to her home and frets over ensuring that each one is made welcome and treated well.

The energy that comes from her story is powerful. Her desperation to mourn her son and have him known, her anxious need to be accepted by these women, it is poignant and bittersweet. The tight-rope walker intersects Claire’s story on the morning of the gathering at her house. One of the ladies saw the walk on her way in, and the mothers chide the idea that a son would be so reckless with his life. An insightful story and interesting connection to the common thread.

If only the other stories had been the same for me. Another primary character is Corrigan, an Irish celibate living in poverty in keeping with a religious order. He keeps a minimal apartment with no locks so that the local prostitutes can use it to have a clean place to use the bathroom and freshen up. As his intentions are misunderstood by the girls’ johns, he is frequently beaten up.

From Corrigan’s story, we meet Tillie and Jazzlyn – mother/daughter prostitutes – Corrigan’s brother, the girl Corrigan falls in love with and a couple of hippie artists enjoying a drug binge. But I just didn’t care about these folks – for whatever reason, the emotion wasn’t there.

I think the idea for McCann’s book is really good, and some would obviously say well executed. But for me, it didn’t hit the mark. I read this one for my book club at work, and had it not been for that, this may have been one I decided to put down.