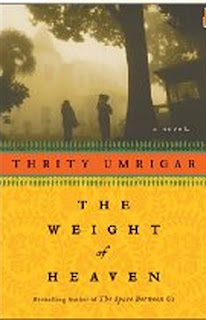 Thrity Umrigar’s The Space Between Us was probably my favorite read from 2009. So I was excited to learn about The Weight of Heaven and thrilled to participate in an on-air chat with Umrigar. And, equally disappointed to learn it has been postponed. (It had been set for tonight.)

I had planned to save my review for after the discussion, but since I’m not sure when it will be rescheduled, I just can’t wait.

The Weight of Heaven returns readers to India, this time with a young American couple who recently lost a child to a sudden illness. After their son’s death, Ellie convinces Frank to accept a job transfer to a location in India where his company, HerbalSolutions, has discovered a native tree that produces a uniquely effective treatment for diabetes. Soon after arriving, Frank develops a fairly obvious pseudo-son relationship with their cook and housekeeper’s son, Ramesh.

First, let me cop to the political agenda that Umrigar obviously has regarding American imperialism. Frank’s American company is portrayed as the rich getting richer off of a local commodity, all the while stripping former laborers of their source of income. Somehow, she works in a few Bush-bashing references to the Iraqi war. I won’t take the time to list all the counter-arguments, let’s just leave it as, I disagree. 😉

That said, this story is a poignant description of the heart ache, pain, blame, guilt and regret a couple faces when they lose a young child. The prologue begins, “A few days after Benny’s death, Ellie and Frank Benton broke into separate people.”

From there she describes how when two people become three, it is nearly impossible to go back to being two. Just beautiful writing. Go here to read the first part, and tell me you’re not hooked. I don’t have children, but I could absolutely feel the brokenness portrayed.

As they are struggling over their marriage, they also struggle over this new affection for a surrogate son. Then, add in the class conflict over drawing the line between wanting to give a child you care for a better life than his parents can and respecting parental boundaries.
Finally, the most driving theme is the lengths that people will go to when faced with significant loss. The loss or threat of loss of children and spouses is explored over and over with varying degrees of desperation. However, this desperation is the universal equalizer.
Class, gender, race, wealth, cultural boundaries, familial relationships – The Weight of Heaven, like The Space Between Us, is a richly layered and heartbreaking story. Umrigar again receives my highest recommendation.

6 Replies to “Book Review :: The Weight of Heaven”