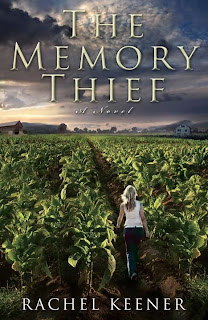 The Memory Thief by Rachel Keener tells the story – in alternating voices – of two young girls, both victims of abusive homes and in search of freedom.

Hannah, raised by strict religious zealots – albeit wealthy, experiences her first bit of freedom during a summer when her parents move to the South Carolina coast for her father’s job. Succumbing to many ‘firsts,’ she finds herself pregnant. In an attempt to save the reputation of the family, Hannah’s mother gives the child (and $6,000) to the first person who agrees to take the baby.
Angel is seeking freedom when she sets on fire the trailer she’s been living in with her parents and sister, after one by one, each has left her. She was raised poor and by alcoholic parents who taught her the only way to survive was by lying, cheating and stealing. When she was 12, she learned from her sister she could add dancing to that dangerous mix.
How these two lives intersect is no leap of the imagination. But their stories – and for me particularly Hannah’s – are interesting and sometimes even insightful. Despite the victim- circumstances they are raised in, both grow to become completely culpable in their bad situations. But in the end, in finding each other, they also find redemption. Trite, I know.
For me what kept this OK read from being better was the style of writing. Appropriately named The Memory Thief, I often felt someone had stolen information from me as the stories jumped ahead without providing adequate transition. It was almost as if the book had once been much longer but was edited down without careful consideration to what was being cut.
Along the same lines, the narrative lacked consistent rhythm. Time may leap weeks, months or years and then stop for glimpses of detail, only to pick back up at another undesignated or determined interval. Also, Angel’s story is told largely in flashback. And for the first half of the novel, these are given in chronological order (makes sense), but then Keener starts mixing it up & the reader never knows how old Angel may be at the latest “landing.” She’s obviously filling in detail that she didn’t want revealed earlier, but it just doesn’t work.
I guess in short I felt like the story was written without the end in mind. Or maybe, it was only the end Keener had in mind and was otherwise grasping at how to get there. I’m not sure, but I do know that as a reader it was frustrating and annoying.
This one is easily skipped.
*****
This book was graciously provided to me by Hachette Book Group as an advanced reading copy and is due to be published in paperback March 2010. Also, it is not to be confused by the motion picture movie soon to be released by the same name.