This guest review is by frequent reader and commentator, Tiff.
The Angel’s Game by Carlos Ruiz Zafon 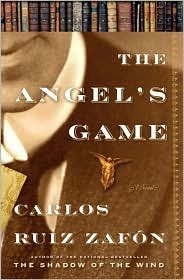 One of my favorite books is The Shadow of the Wind by Carlos Ruiz Zafon so when I saw that he had another book out, I ran to the book store. I love Zafon’s writing because it’s hard to put a label on it. It’s mystery/gothic/ romance/historical fiction with a fair portion of sarcasm and wit. I was pulled immediately into the story and glad to see that he hadn’t changed.

The main character is a writer named David Martin. He begins his writing career as a newspaper boy and graduates to writing serial “penny dreadfuls” that are formulaic, but gripping to his audience. He soon earns the scorn of his fellow newspaper writers for his success and leaves the newspaper when offered a book deal from an unscrupulous publishing house. While writing under the pseudonym of Ignatius B. Samson, he receives a letter from an admirer, Andreas Corelli. And now the really dark, spooky things begin to happen. Corelli convinces Martin to write a new novel that is to be the basis for a new religion. Corelli isn’t religious; he’s a cynic and wants to further the deception of the “opiate of the masses”. Along the way, Martin finds a mystery to be solved, a true friend, and a lover, among other things.

Since The Shadow of the Wind is one of my favorite reads, I really enjoyed the way Zafon brought back characters from that book to this one. This is not a prequel to The Shadow of the Wind, but it’s interesting to see some of the same characters and learn about their backgrounds. The Sempere and Sons Booksellers and The Cemetery of Forgotten Books play an important role in this story and enable Martin to find the path to his mystery’s solution.

Zafon has a gift of writing in the gothic style and I truly enjoy reading his books, including this one. I love to read stories that are dark and have an element of the supernatural in them. That doesn’t mean I like horror…quite the opposite! I do not consider this book to be of the horror genre at all even though it does explore the occult and has plenty of gory violence. All of these things serve the story and are not gratuitous. Zafon also explores the idea of a book capturing an author’s soul and uses this as a theme throughout the story. In the last chapter he writes, “Every book, every volume you see, has a soul. The soul of the person who wrote it and the soul of those who read it and lived and dreamed with it. Every time a book changes hands, every time someone runs his eyes down its pages, its spirit grows and strengthens.” I’m not sure this is true of every book, but I know that I have been affected by many books in this mystic way.

Nevertheless this does not mean that the book was flawless. About two thirds of the way through the book, I felt like the author lost sight of his story. I wanted to find out why Corelli was so obsessed by starting a new religion and this is never really explained other than his urge to deceive mankind. Why is he so vindictive? I wanted to find out how all of the plot lines fit together and never had a satisfying explanation. I wanted to find out why Corelli would try to redeem himself at the end and the explanation given, forgive me, was just confusing and disappointing. The last chapter of the book was a let down for me after enjoying the rest of the book so much. Zafon’s strength is in his dialogue and characterization in The Angel’s Game, not always in the convergence of his plot lines. After all, it is written in such a way that you don’t know if Martin is sane, schizophrenic, or dreaming. I think perhaps Zafon began with a wonderful idea and his creativity got the best of him. I would certainly recommend reading this book, but keep your wits about you – you’ll end up with question marks at the end. However, after letting the book percolate for a few days, I think Zafon may have wanted the reader to feel this way after reading it. It’s his style, right?