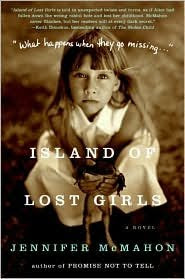 “The truth was, when the rabbit got out of the car, there in Pat’s Mini Mart parking lot at quarter to three on a Monday afternoon, it didn’t occur to Rhonda that there might be a person inside.”

What a great line! This quote from the novel used on the back cover gave me high expectations for Jennifer Mcmahon’s Island of the Lost Girls – expectations that were not realized.

Island of Lost Girls is about a child abduction witnessed by the main character, Rhonda. The story alternates between current time (2006) and Rhonda’s early adolescent years – 1993. Witnessing the abduction and then living through and participating in the investigation (more than she should have been), rekindles memories from childhood of her relationship with another girl who eventually went missing – her best friend Lizzy – and Lizzy’s older brother Peter, for whom Rhonda has been harboring a near 20-year crush.

What is so insanely frustrating about this book is that Rhonda obviously knows more than what she tells the police about the abduction that she sees. (See previous post about unlikable / flawed main characters.) She immediately connects the person wearing the rabbit suit to Lizzy and Peter’s father. But because Peter is an early suspect, she is afraid that her information will add to his apparent guilt. Did I mention Peter is married with a kid? Yeah, Rhonda needs to grow up and get over it.

While Peter is ultimately vindicated (the guilty parties are another bit of a hat trick), what he’s been hiding that makes him look guilty is the mystery behind the disappearance of his father in 1993 and younger sister several years later – a story line that might not be too bad if it were better developed. Mix in a bunch of irrelevant submarine imagery and perhaps not as irrelevant but equally annoying, production of Peter Pan, and there you have Island of Lost Girls.

In the end, what was most disappointing for me is that similar to The Rest of Her Life, the author had a great idea that was poorly executed.