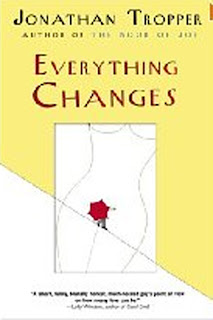 Guest Review by: Bunny of bunnygoround.blogspot.com
Everything Changes by Jonathan Tropper

What I mean is that Tropper seems to have a formula going—30-something male (here it is Zach) in a seemingly fabulous life (here living in New York City with a good job and a beautiful fiancé) has a life-altering happening—or two (here, a major health scare and the return of his absentee father who has been MIA for 20 years)—and reevaluates his life, resulting in outcomes both touching and comical. It’s sort of a “third-life crisis” approach.

I will say that Tropper’s formula is not a bad one—in fact, while I struggled at the start of The Book of Joe, Tropper hooked me right from the start this time. He sets the stage for future events quickly, revealing big plot points early on. Tropper also knows how to move the story along—the entire book takes place over an approximate two week period.

One thing that left me slightly disappointed with this book was the characterization. I raved about Tropper’s characterization in The Book of Joe, but found it lacking somewhat here. The most compelling character is Norm, Zach’s “freewheeling, Viagra-popping father.” Norm is reason alone to read this book—I kept reading just to see what he would do next. He is insightful, indulgent and pathetic, all at the same time, and his narratives and scenes are the best in the book.

The other characters (and Tropper sets up another promising cast of characters)—from Zach to his long-suffering mother to his helplessly lost best friend Jed—are all about one paragraph shy of being great. I kept wanting to know more about them, really get them, but Tropper never quite got there for me. Though, like The Book of Joe, I think this book would make a great movie based on the characters alone.

Tropper again does a great job of balancing the wry and comical moments with the sorrowful and tragic moments. While I don’t want to reveal any spoilers, there also is a great twist at the end of the book that I did not see coming. And the end, again much like The Book of Joe, is not all tidy and wrapped up with a bow. Like life, it’s a little messy, leaving you with a few questions and wanting just a little more.