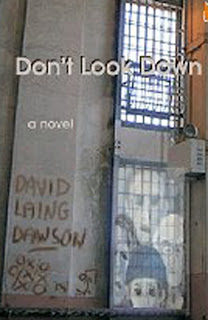 Don’t Look Down is a novella by David Laing Dawson. It is the story of four men who share a room in a minimum security mental institution. They are a seemingly senile elderly man, a young paranoid schizophrenic, a violent sociopath and a suicidally depressed delusional. All are there because they’ve killed someone.

Dawson allows each character to tell his own story, and does a commendable job at creating unique voices for each of them. While the story itself is short, the reader gets to know the men as individuals. It is evident Dawson pulls heavily on his experience as a medical doctor and psychiatrist at a psychiatric hospital to develop his characters so well.
Henry – the elderly man – shot his wife, his second wife to be diagnosed with terminal cancer. As his attorney is trying to prepare him for trial, the reader gets a glimpse at Henry’s life with his first wife in her search for treatment and inevitable death. David strangles a fellow street dweller in an attempt to kill the evil that has taken residency in her. He constantly keeps his hair wet to thwart other’s ability to read his mind.
Frank has just finished ten years in a federal prison for manslaughter after killing a man in a bar, but officials understand that while he has paid the debt, he’s far from rehabilitated. His demons stem from a family full of violence, drug and alcohol abuse and a mother who turns to hims for ‘comfort‘ after his father’s death. Finally, Joseph – who we know the least about and may not have killed someone – is depressed thinking his life has been nothing but failure after failure and holds delusions of jealousy toward anyone his wife interacts with.
As the men’s stories merge into one, their voices become less distinct, the narrator’s voice changing to third person. While risky, this shift in device works for the most part, since by this time the characters are well distinguishable. And, Dawson provides an epilogue that quickly completes each man’s history.
The merged plot – Frank’s hasty and failed escape with a hostage – which is believable for the setting and probably appropriate for the length of the work, was not as satisfying as I had hoped. I would have preferred a longer book, even more of the individual’s stories and a more developed action.
However, what Dawson is able to accomplish by using his insider knowledge and giving readers an honest, unapologetic look into the minds (and sometimes hearts) of the people who occupy mental institutions, was worth the effort.
This book was provided to me as a book reviewer’s copy by Bostick Communications.