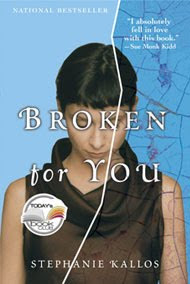 I’ve talked a bit here about the type of books I typically select to listen to, and Broken for You is not one of them. The story by Stephanie Kallos is about an eccentric elderly woman who learns that she has an inoperable and terminal brain tumor.

Earlier in her life Margaret suffered the death of a young child and a divorce and so currently lives in a huge mansion in Seattle, full of valuable antique china and porcelain do-dads, a collection leftover from her father – a collection that was acquired during WWII when Nazi’s raided the home of Jewish evacuees. Margaret carries a deep burden of guilt in owning the antiques.

In a search to give her life meaning in its 11th hour, Margaret takes in a border, Wanda Schultz, who is also alone in the world. Wanda, abandoned by her mother and father and raised by an aunt in a home with eight other children, is in Seattle on a quest to find the boyfriend who also left her.

At first Broken for You seems to be a novel completely reliant on characterization. (So, not the type I’d want to listen to.) However, as Kallos unfolds Wanda’s story and the story of her father – now MJ Stryker – as well as the story of Margaret’s massive collection, a narrative emerges that made me feel – and really like – these characters even more.

In due course, Margaret has several others living with them as well: a hospice nurse (for her final days), a former doorman turned boyfriend to Margaret, a cook and a handyman who is suffering from unrequited love for Wanda. Together, these unlikely friends create a family and help Margaret redeem her father’s sins and Wanda find purpose within herself.

If contemporary fiction is suffering from a lack of respectably flawed characters, Kallos is one answer. Margaret, Wanda and MJ are all beautifully crafted in their shortcomings. Margaret believes her objects speak to her, and her deceased mother and son are frequent and noisy guests in her presence. Wanda can’t get past being the one who is ‘left‘ and in the process mistreats the ones who stay. MJ suffers from his own feelings of being left, while at the same time bears the guilt for leaving. Neither Wanda nor MJ feel worthy of love when it is offered.

I’m not sure I would have picked this one up & added to my TBR pile, and despite my early misgivings, I’m really glad I met Margaret and her house of characters.