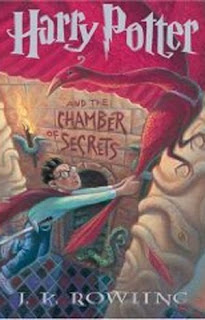 I’ve just finished the second Harry Potter book (on tape) – Harry Potter and the Chamber of Secrets, and I give JK Rowling two thumbs up. Is JK Rowling the most talented writer of today? No. Are these great works of literature? By no means. The plot lines themselves are simple and formulaic. But overall the works are incredibly creative, and I believe are set to become classics of young adult literature. Why? you ask – I’ll tell you.

First, at the core of these books are timeless themes of good vs. evil; puzzles, mazes and tests; and journeys. These are all set in a magical setting where the impossible is possible and the unlikely is probable – all elements of fantasy that children and young adults thrive on, and I would argue, need for healthy development.

Second, she is amazingly creative. The level of detail she goes to in painting a picture that comes to life is remarkable. Just the number of nonsenseable words Rowling invents for Potter’s everyday life is astounding. Indeed, she has created a new language and vocabulary. I haven’t seen it, but I would bet that someone has written a Harry Potter Dictionary.

When I first posted here that I was going to listen to these on tape, I alluded to a bit of backlash from the Christian community regarding Harry Potter. Actually, since then I found where Christianity Today has published a number of complimentary pieces on the series. No doubt Potter praises witches and wizards, and he does on occasion use less than preferable methods to achieve his means – most often when faced with evil (not excusing it – just saying it). However, Potter has some pretty admirable qualities as well, and I bet that any of these individual elements could provide a great talking opportunity between parent and child to bring home more clearly the values you (as parent) want your child to learn.

I predict that the generation that has grown up with Harry Potter will keep him around. And, that in the not too distant future, as these kids become parents, they’ll be enjoying the stories all over again as they read them to their kids. And that is a wonderful thing.

I’m just so sorry to be a muggle!

One Reply to “Book on Tape :: Harry Potter”