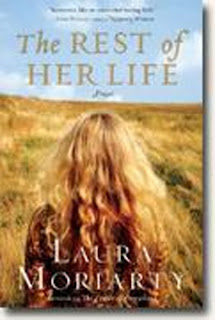 Laura Moriarty’s novel The Rest of Her Life is the story of a strained relationship between a mother and daughter when tragedy hits.

Kara – the daughter – is just days away from high school graduation and weeks away from embarking on college and the rest of her life, when she kills a pedestrian (and fellow student) because of careless driving. It is told from the mother’s point of view – Leigh – and so then the story is less tragedy and more relationship, and even then is less about the relationship than it is about Leigh’s introspection. The accident is simply the catalyst.

I have a friend who loved this book. When she recommended it and I looked it up, I was pleasantly surprised to find I already owned it. I think I picked it up on sale when browsing a bookstore; it looked intriguing. Most girls I know – no matter how close they are currently to their moms – went though a period of a strained relationship, and so I assumed I would empathize with the story line.

However, pretty quickly Leigh struck me as immature and self-serving. Quite frankly, I felt Kara demonstrated more adult behavior than her mom. After the accident, Leigh recalls a similar tragedy 15 years earlier and how much she had sympathized with (in this case) the teenage boy who had killed a young mom and was sentenced to prison. She wrote to the boy explaining how sorry she was for him, empathizing that even she on occasion had not completely stopped at every stop sign. (By the way, he passed on double lines, late for work, and hit an oncoming car head on.) Leigh laments, “The (widowed father) had lost his wife, but he had his child, the sympathy of his community, and his own righteous indignation. Kevin Wornall had only guilt.” Eh?
This irrational, illogical thought pattern permeates the novel. Toward the end of the summer, Leigh takes to following the dead girl’s mother. She mostly goes during the day but also finds excuses to leave the house in the evening. This tailing culminates in a confrontation with the mother where she actually asks, “Is this what (your daughter) would have wanted for you? For you to hate Kara so much?…I want you to stop hurting Kara…This is our home.”
Seriously? She seriously thinks she has the right to ask anything of this woman?
The unintended irony of the story is that it ends with Leigh’s husband forging a solid relationship with their awkward and artsy son, offering little resolution to Leigh and Kara’s own shortcomings.
I think the idea of the book was a good one – tragedy can often expose weaknesses in relationships and hopefully bring restoration and healing. However, this requires respectable characters and in this case, I feel, Moriarty has fallen short.

5 Replies to “Book Review :: The Rest of Her Life”