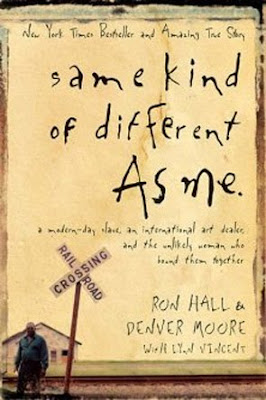 Same Kind of Different As Me is the story of the miracle that God performs in the hearts of men to make unlikely friendships a reality. This book has been on my TBR pile for about a year – since my college roomie wrote about it on her blog here in a post called “Two Books that Can Change You.”

The parallel true stories of Ron Hall and Denver Moore, this quick read is anything but light. Subtitled ‘a modern-day slave, and international art dealer, and the unlikely woman who bound them together,’ this book is first a sobering reminder of the poverty, racism and inequality that permeates our country. But then it is a story about getting beyond the inequality by accepting others for who they are and where they are.
Ron, middle-class white man who grows into a million-dollar art dealer, meets Denver when he and his wife, Debbie, begin volunteering at a homeless mission. Denver, born on a sharecropper’s farm and raised in the poverty and racism of 20th century Louisiana, is an older, black man, hardened by life’s experiences that even the other homeless folks avoid. Slowly Ron and Denver forge a friendship that proves to have no boundaries.
One of the first things that spoke to me was Denver’s attitude about ‘white folk’s practice of catch and release.’ He compares this fishing practice to friendships, and Denver is wary of starting something with Ron that Ron won’t see through. Denver questions Ron’s commitment – to the misson and to him. I think this got to me because this is one thing that holds me back from doing things I think I should. I’m afraid I won’t be able to stay committed.

The second thing that really impacted me – motivated, inspired, pick the word – was Denver’s commitment to prayer, particularly when Debbie was diagnosed with cancer. He talks about praying with such earnest desperation. He gathers the other people from the mission to pray likewise. Paraphrasing this section, he says that while Ron had the means to do whatever he could to make Debbie well, Denver prayed as hard as he could because that was all he had to give.

What a reminder that self-sufficiency has become an enemy of the faith. We live in a culture that is so capable, so wealthy and so independent that we forget that what Christ wants is for us to fully depend on Him. So often it takes times of crisis to remember this.

After reading this book, you won’t ever think of the homeless, missions or friendships the same. Currently, Ron and Denver travel and speak together, reaching out and ministering to homeless missions across the country.

2 Replies to “Book Review :: Same Kind of Different As Me”