I love reading. I love the experience of holding a book in my hands, smelling the print, turning the paper pages expectantly, tracking the pages I’ve read and how many I have to go. Just for the record, I am not a candidate for a kindle. Mark if off your Christmas list for me now. I would much rather have this, this or these. 😉 (There’s no theme there…)

Because I love the experience of reading so much, when I’m looking for a book on tape, I typically pick something that I’m not likely to physically read. I want it to be entertaining, but not necessarily deep or something I have to think about. Good chick-lit or a mystery works well. Mary Higgins Clark is perfect. Occasionally I’ll listen to something that I really wish I had read… such was the case with The Thirteenth Tale. But I digress.

I just finished my first book on tape in while. Not sure why I had gotten out of the habit, but I’m back now. Get ready! 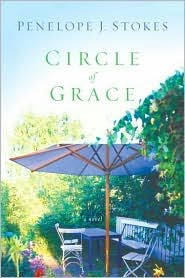 This one was Circle of Grace by Penelope Stokes. It is the story of four college roommates who stay connected after college by sharing a ‘circle journal.’ They take turns updating the journal with their lives and then sending it on to the next girl. Thirty years after graduation, when the crisis of cancer causes one of the girls – Grace – to contact each of the other three directly and request a reunion, they find out that none of them have quite the life that they purported in the journal.

The first four parts of the story allows each character to tell in first person their story and how different it is from the one they described in the journal. Then the final part – during weekend of the reunion and the weeks after – varies among the narrators. This worked well as it allowed the listener to get to know and empathize with each of the characters, one at a time.

The characters are Grace: a poor and lonely librarian whose father’s tragic and scandalous death initiated a life of hiding the truth. Lovey: the stereotypical cheerleader who marries the star football player who uses a career ending injury to launch a wildly successful athletic wear business. Liz: a counselor and social advocate whose own failed marriage is an emotional burden. Tess: a preacher’s daughter and writer who has the most successful life of them all but still wrestles with fear of failure.

Stokes uses a lot of religious imagery and themes, even beginning the book and the girls’ relationship with a group project based on Pilot’s question, “What is truth?” The collective answer that they come up with is circled back to at the end of the story. Tess – the undeniable hero of the group – has the strongest faith – one that she was questioning in college. While she doesn’t convince all to follow suit, she undoubtedly has the respect of all.

Except for the horrible southern drawl that the reader gives Lovey, this is just what I look for in a book to listen to. The characters were interesting and the plot, while a bit predictable, was entertaining enough for me to look forward to getting into my car at the beginning and end of each day.

2 Replies to “Book on Tape Review :: Circle of Grace”