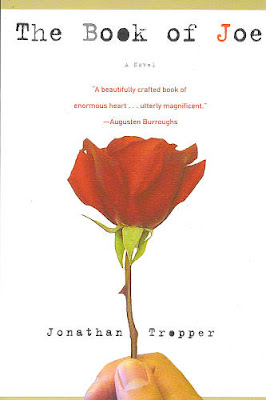 The Book of Joe by Jonathan Tropper

Male authors are somewhat of a rarity in the world of fiction. Think about it—for every John Grisham or Nicholas Sparks, there are a gazillion Janet Evanovichs and Danielle Steels. Which is one reason I was interested in this book from the start.

The premise of the book is an interesting one, as well—small town boy, 30-something Joe, grows up and gets out of town as soon as he can, then writes a scathing, thinly-veiled autobiographical novel about his small town roots and most of the people who still live there. The book becomes a runaway hit, and is made into a movie, bringing intense focus to Bush Falls, the town where Joe grew up.

Flash-forward several years down the road, and Joe’s dad has a stroke, and Joe returns to Bush Falls, not fully realizing the amount of antipathy harbored for him among the town folk. Within the first 24 hours, his car is keyed, he is beaten bloody by a former classmate and a senior citizen dumps a milkshake on him. And that’s just the beginning.

I admit that it took me a while to get into this book. At first, I thought the book was going to be a laborious, self-indulgent, big-word-and-winded look at an asshole bachelor. But I persevered, and by 100 pages in, I was hooked.

First, Tropper is wonderful at characterization, drawing realistic characters that are both flawed and yet very, very human. From the comatose father to the town bully to Joe’s agent, he presents a clear view of what makes these people who they are and, in turn, no character is extraneous. In fact, in many cases, their stories are as equally compelling as Joe’s with each character, major and minor, contributing to the finely woven tapestry that is Joe’s world in Bush Falls.

And then there is Joe. Joe, who the reader should hate by all accounts due to his irreverent attitude and smart mouth. Yet, as the story slowly unfolds, you realize Joe is a product of an extremely tragic youth. I don’t want to provide any spoilers, but Joe’s life is one that would have broken many people. Instead, he exerts his pain, and the resulting anger, on the town and the people he blames for his empty, scarred life by writing a vicious and vengeful book.

It’s only when he returns to the town he vilified that Joe realizes he is deeply broken and unhappy, and that his “revenge” did little to soothe his grief from the past. Joe then begins to understand that in order to gain happiness, he must attempt to repair some of the damage surrounding him, even if it means enduring more pain in the process. To me, this point is the one that resonated the most: Blame, whine and point the finger all you want, but at the end of the day, we each are responsible for our own personal happiness.

Even with the sometimes heavy subject matter, Tropper keeps the story moving along with Joe’s self-depreciating, cynical and wry banter, which provides laugh out loud moments. Again, I am trying to avoid spoilers, but I must also note that there are several melancholy, and even tragic, moments. And Tropper doesn’t candy-coat the painful moments. Instead he lets them play out, just like in real life.

While not sad, the ending also is not full of rainbows and butterflies, which I personally appreciated. Instead, it is an ending with the promise of a better future. To quote Joe, who has this last line, “I can live with maybe.” And, really, isn’t that sometimes the best we can hope for in this world?