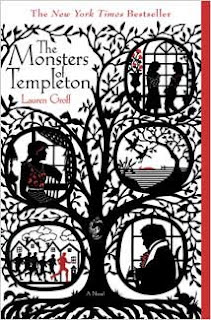 Lauren Goff’s debut novel – The Monsters of Templeton – has a little something for everyone. It is the story of a girl who ditches a west coast PhD program just short of completing her dissertation to return home – pregnant – and embarks on a family research project to learn her own father’s identity.

Peppered in with what you might expect one to discover in a multi-generational family epic are some less expected lore-ish features including a two hundred year old leviathan and a human fire-starter. And so, what we end up with is mystery, folk tales and historical fiction all wrapped in a present day chick-lit novel about a mother and daughter and the regret when one repeats the other’s sins.

Also peppered in are allusions to James Fenimore Cooper’s work and characters – as the setting of ‘Templeton’ is a thinly veiled ‘Cooperstown’ – the same device Fenimore Cooper uses – and Goff loosely ties her narrator’s family tree to that of an ‘author-son’ of a town’s founder.

If this is all sounding a bit too literary for your taste, forget Cooper and enjoy the interesting personalities that emerge: a five-time widow who confesses to the murder of at least three of her husbands, a half-tongued (mute) Indian maiden, a cross-dressing madame, and the narrator’s own mother – a commune-hippie turned devout Baptist – just to name a few. There are no less than a half-dozen illegitimate children, complete with the stories of their ‘cover-up’ – one of which was assigned to a woman more than a month in the grave.

Perhaps the least interesting character to me was the narrator herself who I felt was a bit of a self-indulgent, spoiled brat. Her longing for the west coast wavers between missing the married professor, the father of her ‘lump’ (her name for what is growing inside), and shallow guilt for being absentee to a friend recently diagnosed with lupus.

While the primary story line may lack depth, the book is well-written and is thick with intriguing secondary episodes.

2 Replies to “Book Review :: The Monsters of Templeton”