So I finally finished Infidel – just very little time to read this week. I’m very glad that I read it, in the same way you’re really glad when you’ve gone to the dentist – it may not have been the best experience, but you know you’re better for it. (No offense, Dr. Bennett!)

I still hold to the opinion that this book is not a great literary piece. (If you’re confused, see my previous post.) The monotonous rhythm of events never changed. So, while I know all the names of these people who were important and influential in her life, I don’t have a ‘sense’ of any of them.
It was interesting, though, following her rise and the literal politics of how one goes from being a Somali refugee to a member of Holland’s parliament. And, I was really interested in her message. In a world where it is so politically incorrect to speak against a specific religion, Ali lives every day in fear of her life for what she has exposed about what Islam teaches to Muslims. 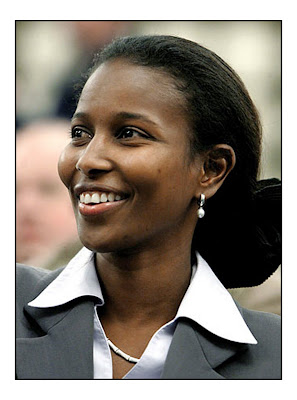 In 2004, Ali made a short film with a producer called Submission. In it, four women represent four types of oppression that she feels Islam perpetuates – total submission to men, arranged marriages, physical abuse and sexual abuse. (The last female is a young girl who was raped by her uncle, but is now pregnant and so will be punished for having sex outside of marriage.) She uses verses from the Quran that she feels supports the oppression.
The producer who helped Ali with this film was murdered two months after its release in broad daylight – a knife plunged into his chest stabbed a five-page letter of warning addressed to Ali.
She says the world would be outraged if it new how many honor killings occur today. And, “[t]he fact is that hundreds of millions of women around the world live in forced marriages, and six thousand small girls are excised every day.”
So she has dedicated her life to giving a voice to all the Muslim women who are oppressed, abused and silenced.
It is one thing for a person of means to learn of someone’s plight and spend the rest of their life fighting for a cause of the weak and helpless. It is quite another for a women with no means, who knows first hand, to rise above out of sheer will and be able to enlighten the world around her of what she knows because she has lived it – and escaped. This is what makes Infidel a worthy read.

One Reply to “Book Review :: Infidel”