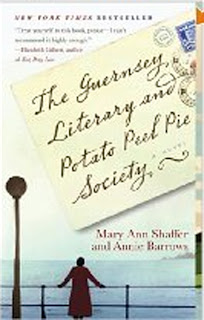 Though it starts and finishes light and fluffy, Mary Ann Shaffer and Annie Barrows’ The Guernsey Literary and Potato Peel Pie Society has surprising depth at its core.

Suggested to me by my mom, this one sat for awhile on the TBR  pile. I remember when she first started it she wasn’t that thrilled, and I guess that initial impression stayed with me, leading me to put it off & put it off.
The novel is a series of letters, mostly to or from Juliet Ashton, a British writer just post WWII. She becomes pen pals with a number of residents of the channel island Guernsey, who formed a literary club during its German occupation. Through the correspondence, Miss Ashton becomes enamored with her new found friends and particularly intrigued by the person of Elizabeth, who inspired the creation of the club but has been lost since the end of the war. Due to her new affection, she visits the island, and during her visit decides to make Elizabeth the center of next literary venture.
While this description may sound trivial, as indeed the book itself begins, what emerges from the letters are the survivor stories – tales of what it takes physically and emotionally to survive an enemies’ occupation. Sending their children away to live in England, food rationing and the literal occupation of homes are some of the subjects of letters to Miss Ashton that make her want to learn more about these remarkable people.
Inside these topics, humanity is revealed. The lengths a neighbor will go to to ease the suffering of another, acts of kindness that even the enemy can sometimes offer, when a child’s belief in magic truly bolsters courage and the thrill gained just to know an enemy, unbeknownst to him, has been outwitted. These are the things of hope that reveal themselves in difficult circumstances.
While this read isn’t of huge literary merit, it is quick, light and interesting.  The Guernsey Literary and Potato Peel Pie Society is a worthy read, if for no other reason, like Sarah’s Key, it educated me to a new piece of history and a previously unknown location.