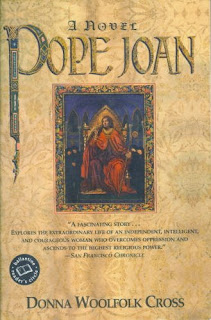 Donna Cross’ Pope Joan has been on my TBR list for a couple of years. There is much about the Catholic church that intrigues me, and the idea of a 9th century female who ascends to the position of Pope even more so. This novel did not disappoint.

Cross has done her research, and while admitting that the book is a work of fiction, makes her case for the actuality of the character and a handful of the events leading to and surrounding Joan’s papacy. In the novel, Joan is made Pope after a number of years living as a man in a monastery and then as physician and adviser to two previous Popes. I don’t think it is a far stretch to 1. believe that a woman would do this in order be educated (think Barbara Streisand’s Yentl) and 2. that the Church would go to great lengths to conceal such a duping.

Regardless if it is truth or fiction, Pope Joan is a good read. It’s an excellent historical exposition and reminds the reader what it would have been like to live in a culture so dominated by men and ruled by the Church. Its short-sightedness on both accounts is astonishing. I know that Cross has a bit of a feminist agenda, but her topic here is legitimate, and her case for the abuses endured by women at the hand of men and perpetuated by the church is well made.

Joan rises through the ranks because of her intellect and ability as a physician. While living as a man, she is in constant fear for her life knowing if her identity is discovered, it will be her end. There’s a poignant scene with her father, the village canon, who despite every longing he has for his son’s success in the Church, is willing to betray his daughter, even with his last breath.

Without getting too deep or political here, one reflection on Cross’ feminist agenda. It is easy to get caught up in the legendary story of knights, Vikings and monks and tie Joan’s story to a world that existed a thousand years ago. However, her story is relevant today where in many cultures women are at the mercy of men, and abuse is in the name of religion. Like Joan, education is key to freedom.

Pope Joan is being made into a movie, to be released in Germany in October. A US release date has not been given.