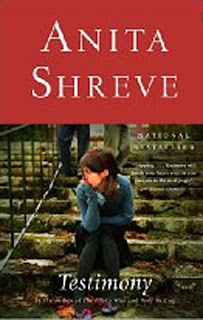 Anita Shreve is one of my favorite writers because she’s reliable. While Fortune’s Rocks is probably her only book that rates a “5” – you can count on her to consistently give you 3.5 to 4.5’s. Testimony is a 4.
In an interview, Shreve confesses to her interest in the consequences that come from a single reckless act – in fact, many of her novels are built on this premise. In this case, the event is a literal drunken orgy that takes place on the campus of an elite secondary prep school involving three basketball players and an underage female. A fourth basketball player records the incident on a home movie camera.
The story is the aftermath, told from no less than a dozen voices – all characters involved, from the boys’ mothers to the local misfit who sells alcohol to students, and of course the kids themselves. The plot, not always revealed sequentially, is what happens to the students, their families, the school, and the entire small town where Avery Academy is located.
A major voice is that of Mike, Avery’s dean, who began the chain of events that led to the night becoming as devastating as it did. (I would argue that what happened are a consequence to his reckless act, which just begat a series of reckless acts.)
There aren’t any huge surprises in the plot, but there are enough turns, that I’ll refrain from spoiling them here. Here are a few things that I liked about Testimony.
The changes in voice. Shreve gives many of those involved a voice in her book, and they are distinct. She changes up person; while most do speak from first, Mike’s story is told in third person and one of the mother’s voices is heard in second – not an easy task, and quite frankly, something that would be annoying if it weren’t so well weaved into the others. One other (minor) student’s tale is told in third, and I might have liked this better if Mike had been the only one in third. It would have made for a good discussion on the reader needing / wanting more distance from him. That actually would still be a good discussion.
Second, the girl is not a victim. Shreve never allows the reader to believe that the underaged girl is a victim; that is not what this book is about. (To believe she is a victim, the reader would have to believe that under no circumstances can a 14 year old consent to sex with a school mate; while there probably are those out there, I’m not that reader.) So, by removing that from discussion, Shreve is able to put more scrutiny on the real subject – underage drinking and its consequences. (This is an admitted agenda by Shreve.)
However, what I like most is that the novel becomes larger than Shreve’s agenda. First, the character of Mike is not culpable in the primary scene, but he is a guilty character – on more than one front. And so his influence – both directly as a character and indirectly as just a force in the novel – transcends the single act that is her focus. And, the introspective question of “what motivates us” is largely at play. As all of the different voices are spoken, beneath all of them are attempts to explain why: why did they act?, why did they choose?, why did they speak (or not speak)?
The book ends with a letter from Rob, the brightest of the three boys involved, with his interpretation of the series of events. It is Rob’s voice that provides real authenticity to the novel. I believe this is the letter Shreve wants parents to read because in it, he attempts to answer many of the ‘why’ questions presented. It is a pretty enlightening answer.